Outcry over Harry Potter Book Burning by Priests in Poland 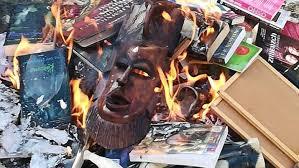 The burning of Harry Potter "magic" books by priests in Poland triggered a wave of protest in the majority Catholic country on Tuesday with critics making comparisons with totalitarian regimes and the Inquisition.

The Episcopate has so far declined to comment on the burning in a parish at the Baltic port city of Gdansk after Sunday mass.

A post detailing the incident on a Facebook page run by the Catholic "SMS from Heaven" evangelical group has gone viral, drawing heavy flak both online and off, but also pockets of support from internet users.

Father Jan Kucharski, the priest in the parish where the book burning took place, told the natemat.pl news website they had set fire to items "linked to the occult and magic" in line with Biblical exhortations against practicing idolatry.

Two altar boys are also shown standing over the fire pit as a priest prays over the items including a book from the Twilight vampire-themed fantasy romance series, a 'Hello Kitty' umbrella and a Hindu religious figurine.

"The participation of children in this practice is an act of particularly reprehensible demoralization," Lukasz Turski, a respected commentator and physics professor, wrote in an open letter published online Tuesday by liberal daily Gazeta Wyborcza.

Turski also called for the "church hierarchy to immediately condemn and cut short this activity, leaving no doubt as to the position of the Episcopate on this matter" and went on to draw comparisons to Nazi Germany.

"In 1821, Heinrich Heine made a prophetic statement in his 'Almanzor' drama: 'when we start to burn books, we finish by burning people'," he wrote.

"A hundred and some odd years later, in Nazi Germany, Heine and (Thomas) Mann's books and many other prominent artists were burning in piles in Berlin; a dozen or so years later, crematoria burned ... the victims of the ideological madness of the supposedly civilized world."

The top-selling Fakt tabloid daily thundered that "nobody expected a Holy Inquisition," referring to the campaign against heresy led by the Catholic Church in the Middle Ages that involved burning books and witch-hunting.

"They're destroying books like in the Middle Ages," Fakt said.

Meanwhile, an anti-smog NGO on Tuesday filed a complaint with Gdansk prosecutors against the priests for "illegally burning waste" including "synthetic materials" that "polluted the air creating a health hazard."