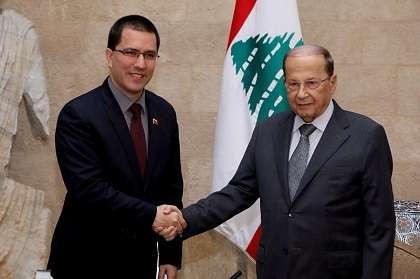 NNA said discussions highlighted the Lebanese-Venezuelan relations, and the situation of the Lebanese and Venezuelans of Lebanese origin and their role in public life in Venezuela.

Venezuela's National Constituent Assembly, loyal to President Nicolas Maduro, has stripped opposition leader Juan Guaidó of his parliamentary immunity, putting him at risk of arrest for supposedly violating the constitution when he declared himself interim president in January.

"He is in breach of most part of the constitution, so the judiciary has to take care of those who violated the Venezuelan law," Arreaza told reporters in Beirut.

The Ambassador of Venezuela to Lebanon and several Venezuelan diplomats accompanied Arreaza during his meeting with Aoun.

Arreaza is reportedly expected to meet with an official from the Hizbullah before traveling onward to Syria.

The United States and roughly 50 other nations recognize Guaidó as Venezuela's legitimate leader.

Maduro's government has warm relations with Syria and its allies in Lebanon, all of which are opposed to U.S. policies.

Two no-bodies from two banana republics got together and achieved nothing. That is what the true headline should read. How desperate is Moduro when he sends out emissaries to a banana republic for support?