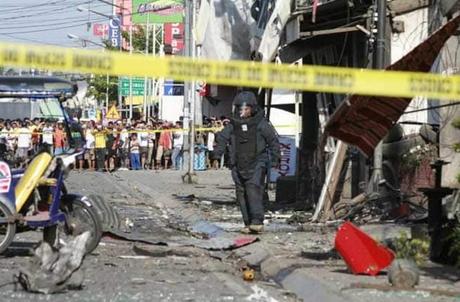 A bomb blast outside a restaurant on Wednesday wounded at least 13 people, including children, in the insurgency-plagued southern Philippines, authorities said.

The explosion shattered a window at the front of the eatery, striking family members gathered for an event in the town of Isulan on Mindanao island, Mayor Marites Pallasigue told AFP.

The southern Philippines is plagued by multiple armed groups ranging from communist insurgents to Islamic State-aligned jihadists, which leave the area mired in poverty and violence.

Police cordoned off the area outside the shattered facade of the restaurant as a probe began into who was responsible.

"The bomb was placed at the back of the air conditioner," said Pallasigue, putting the number of wounded at 13.

"Most the victims are related to each other," she added.

Police confirmed the explosion but said the number of wounded could be as high as 18. No deaths have been reported.

On a neighbouring island to the south of Mindanao, an IS-claimed attack in January on a cathedral during Sunday mass killed 21 and wounded about a hundred others.

The bombing cast a shadow over a vote less than a week earlier to give Muslims in the south of the Catholic majority Philippines greater resources and control over their affairs.

The explosion Wednesday in Isulan happened just a few meters from the site of a deadly blast which occurred last year and was believed to have been carried out by Islamist militants.