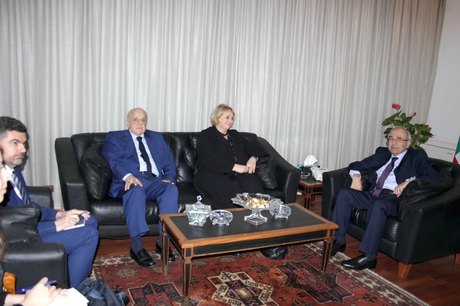 “We discussed with Judge Hrdličková and the accompanying delegation the course of the investigation and the trials that are being conducted at the STL and the President explained the details of these procedures to us, which are special and somehow complicated,” Serhan said after the talks.

“She reassured us that the verdicts will be issued before the end of this year,” he added.

Asked about reports claiming that there are new revelations related to some assassinations, Serhan said: “They did not disclose such things to me, seeing as the trials remain confidential, and we're awaiting the issuance of the ruling by the Trial Chamber.”

“For my part, I expressed the Lebanese government's full readiness to cooperate with the court in all what it may request from us, and they lauded the Lebanese side's cooperation,” the minister added.

The court has put on trial in absentia four Hizbullah suspects accused of being involved in the 2005 assassination of ex-PM Rafik Hariri.

The judges are holding confidential deliberations ahead of the issuance of the rulings.

Hizbullah has denied responsibility, describing the court as a conspiracy and vowing that the accused will never be arrested.

End of which year? its only been 14 years since they started this investigation? that means that there are many 14 year olds out there saying this never happened!

And please lets not blame this on Kizballah as we all know they are a God fearing peace loving alternate to the girl scouts.

“For my part, I expressed the Lebanese government's full readiness to cooperate with the court in all what it may request from us, and they lauded the Lebanese side's cooperation,” the minister added.

This is as bad as the joke of Lebanon's compliance with resolution 1401! Where are the 3 saints that nassrallah said he would never hand over to the judiciary?