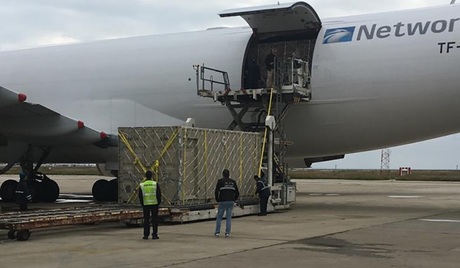 The delivery took place at the Rafik Hariri International Airport in the presence of Lebanese officers and representatives of the U.S. embassy.

The drones are valued at around $11 million.

Kizballah will be thankful for the receipt of such units and they will be on their way to Iran in the next few days. A new cheaper copy will soon be available for purchase in the market in Burj Hamood.

Iran will certainly be using replicas pretty soon. remember the stealth fighter jet made of cardboard as reported on Naharnet a few years back.

True SOS they had a funky looking scaled down plane build of spit and cardboard that they promenaded as a get this "stealth" fighter loool. Its looked like something out of a college B movie but I am sure many brain washed youth following Kizballah in Lebanon were encouraged further to place a suicide yellow bandana on their coconuts, ride their mopeds to kill today's enemy after seeing that cartoon.