To Vote or Not to Vote? The Question Facing Arab Israelis 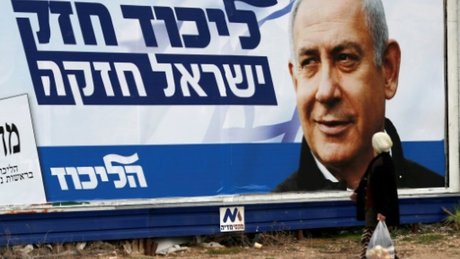 In the days ahead of Israel's April 9 elections, activists in the country's north were not trying to convince some residents who to vote for -- but just to vote.

Israel's Arab citizens, who account for some 17.5 percent of the population, have been engaged in a debate over whether to boycott the upcoming elections.

In 2015, Arab parties ran under one alliance and finished with a historic tally: they won 13 seats out of 120 parliament, making them the third-largest force.

But this year the Arab population is facing their own divisions in addition to hostility from Israel's right-wing and questions over whether participating in the elections in the past has brought any real benefit.

There have long been boycott calls by Israeli Arabs, but the debate has taken on renewed relevance.

"Successive Israeli governments have ostracised the Arab population," Sondos Saleh, a candidate for the Hadash-Taal alliance of Arab parties, told a group of around 100 supporters in the old city of Acre recently.

"Our struggle must not be absent from parliament. The laws are made there. If Arabs boycott the elections, Israel's government will choose Arabs to represent it and who will speak in our name."

"Either we vote or we end up being expelled from the homeland," he sings as the video shows him in a boxing ring with a double of himself to illustrate the debate.

But those opposed have made their message known as well.

In the Arab district of the coastal city of Haifa, campaign posters were defaced in red with the words: "I will go to vote when the martyrs will vote", in a reference to those killed in the Israeli-Palestinian conflict.

Palestinians often venerate those killed in the conflict -- including those who were carrying out attacks against Israelis -- as martyrs to their cause.

Arab Israelis are the descendants of Palestinians who remained on their land after the creation of Israel in 1948.

Most are Muslim, though some are Druze and Christian.

They hold Israeli citizenship -- and as a result have the right to vote -- but are largely supportive of the Palestinian cause and say they face blatant discrimination.

Nearly 50 percent of Arab Israelis lived under the poverty line in 2015, while the poverty rate among other groups in Israel, excluding ultra-Orthodox Jews, was 13.5 percent, according to the OECD.

In 2015, turnout among Arab voters was 64 percent, compared to 72 percent for all Israelis.

"For now, Arab turnout is estimated at 51 percent," said A'as al-Atrash, an analyst based in Nazareth, the largest Arab city in Israel.

Those between 18 and 30 are the most likely to favour a boycott, and young people have campaigned against voting on social media, he says.

They name divisions among Arab parties and frustration with what they see as a lack of concrete achievements in parliament in the past.

Hadash-Taal, a secular list led by longtime politician Ayman Odeh, is polling higher than Raam-Balad, which is an alliance between an Arab nationalist party and an Islamic movement.

Alif Sabbagh, a researcher and activist, defended boycotting at the same rally where Saleh spoke in Acre.

He spoke of three categories of non-voters: those who have always refused to vote because they see Israel as an "occupying and colonial state"; those who decry the lack of achievements by Arab MPs; and those frustrated by recent laws they view as discriminatory.

In 2018, Israel's parliament, or Knesset, passed a law declaring the country the nation-state of the Jewish people.

The law has provoked fears among the non-Jewish population that they have been legally made second-tier citizens.

They say the law favours the country's Jewish nature over its democratic one and the principle of equal rights.

Prime Minister Benjamin Netanyahu has exacerbated those fears with comments during the campaign on the law in which he said Israel was "not a state of all its citizens".

"According to the basic nationality law we passed, Israel is the nation-state of the Jewish people -- and only it," he wrote on Instagram, though added that Arabs have equal rights.

Arab parties have again served as a foil for the right during the campaign, as occurred in 2015 when Netanyahu warned on election day that Arabs were going to the polls "in droves."

Much of the right sees the Arab parties as an anti-Israeli "fifth column".

Right-wing candidate Oren Hazan even released a video borrowing a scene from the spaghetti western "The Good, the Bad and the Ugly" showing him shoot Arab parliament member Jamal Zahalka.

However, according to estimates by al-Atrash, "25 percent to 30 percent of Arab votes will go to Zionist parties", compared with 15 to 16 percent in 2015.