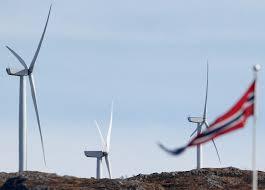 Norway's sovereign wealth fund, the world's biggest at more than $1 trillion, will soon be able to invest in unlisted renewable energy infrastructure projects, such as wind farms and solar parks, the government said Friday.

Currently 66.3 percent of the fund is invested in shares, 30.7 percent in bonds, and three percent in real estate.

While the fund already owns stakes in listed companies in the renewable energy sector, Friday's announcement means it will now have more latitude to invest in infrastructure projects at an earlier stage, thereby allowing it to maximize its gains.

"Allowing for unlisted renewable energy infrastructure is not a climate policy measure, but is a part of the investment strategy for the fund," Finance Minister Siv Jensen said in a statement.

"These investments shall be subject to the same profitability and transparency requirements as the other investments of the fund," she added.

Fuelled by the Norwegian state's oil revenues, the fund already has an envelope of a maximum 60 billion kroner ($7 billion) reserved for climate investments.

That ceiling will now be doubled to 120 billion kroner.

According to consulting firm McKinsey, the global renewable energy market is currently valued at $2.9 trillion, and is expected to rise to $4.2 trillion by 2030.

Norway is the biggest oil and gas producer in Western Europe.

The fund has in recent years gone increasingly green -- moves hailed by the environmental lobby though the changes are usually based on purely financial considerations.

In March, Oslo announced it was selling off its stakes in oil and gas exploration and production companies to reduce its exposure to black gold.

That decision could affect more than a hundred companies specialized in upstream operations, including Chesapeake of the US, China's CNOOC, Canada's Encana, France's Maurel and Britain's Tullow.

But companies involved in downstream operations or which also invest in renewable energies, including all the oil majors, will be spared.

The fund has already partially pulled out of the coal industry, both for environmental and financial reasons, but some companies had until now fallen through the cracks, such as Germany's RWE.

On Friday, the Norwegian government said it was beefing up its criteria.

"It's a decisive step for the health of the fund and the planet," said Tom Sanzillo, head of the IEEFA think tank.