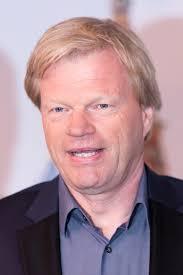 There was a time when Bayern Munich would have been unimaginable without Oliver Kahn, their snarling, self-confident goalkeeper

Those days may soon be here again, as Kahn, now 49 and long retired, prepares to return to Bayern as chief executive officer from 2021.

Bayern's current CEO Karl-Heinz Rummenigge confirmed on Sunday that he would not extend his contract beyond 2021, and that former club captain Kahn would replace him.

"The plan is that Olli Kahn will succeed me, and that I will ease him into the role," said Rummenigge.

"It makes sense: Olli is clever and he knows the club."

Long rumored to be in line for a leadership role at Bayern, Kahn is tailor-made for the CEO role.

In 14 years at the club, Kahn won eight Bundesliga titles, six German Cups and two European finals, and developed a reputation as a testosterone-fueled hothead hell-bent on success.

Between 1994 and 2008, he terrorized team mates and opponents alike, and became one of the most decorated players in the club's history.

A career high came in the Champions League final against Valencia in 2001, when he saved penalties from Zlatko Zahovic, Amedeo Carboni and Mauricio Pellegrino to win the shootout for Bayern.

A year later, his brilliant performances led an unfancied Germany team to the World Cup final, only for his one error to cost Germany victory against Brazil.

The man nicknamed "Titan" and "Vol-Kahn-o" was known as the human embodiment of his club: proud, unpopular and obsessed with winning.

Bayern are a club who revel in their own unpopularity. Their motto, "Mia San Mia", loosely translates as "We are who we are".

As a player, Kahn delighted in the siege mentality.

On that day, Bayern snatched the title away from Schalke with the last kick of the game, and Kahn famously ripped out the corner flag in celebration.

He was well known for his on-field aggression. In an infamous performance against Borussia Dortmund in 1999, he notoriously bit the face of Dortmund striker Heiko Herrlich and directed a studs-first karate kick towards Stephane Chapuisat.

Team-mates were also not safe from Kahn's wrath. He once punched Bayern midfielder Mark Van Bommel in the face while celebrating a goal, and after a defeat to Schalke in 2003, he lambasted his colleagues for their lack of spunk.

"Balls. We need balls. You know what I mean by that," he told a TV reporter after the game.

Kahn has mellowed in retirement, and is now a respected TV pundit. He has also launched various business ventures, including his own line of goalkeeping equipment.

For Rummenigge, this mix of business know-how, familiarity with Bayern and furious competitive spirit make Kahn a perfect candidate to take over as CEO.

"He knows the club well, and he has now got a separate education in finance and business," said the current Bayern boss.

"I am convinced that he is a good successor."