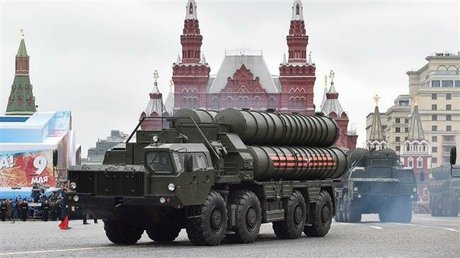 Ankara's purchase of the S-400s risks US sanctions and has further strained already tense relations with Washington.

US officials are concerned over the incompatibility of the S-400s with NATO military hardware as well as Ankara's increasingly close relationship with Russia.

"The S-400 missile defence system was to be delivered in July, maybe we will bring this forward," Erdogan told Turkish journalists on board his plane after a Russia visit, the newspaper said.

Erdogan was in Moscow on Monday for talks with Russian President Vladimir Putin, with the S-400 purchase and joint coordination in Syria on the agenda.

"This step that we have taken for our country's security neither targets a third country nor does it give our sovereign rights over to a third country," Erdogan said.

In a bid to stop Turkey purchasing the S-400s, the US has offered to sell the US Patriot system but Turkish Foreign Minister Mevlut Cavusoglu said this was not guaranteed.

"If the United States does not want to sell the Patriot, tomorrow we can buy a second S-400, or another defence system," he said during an interview with NTV broadcaster.

He said Turkey did not only need the S-400s but also "other defence systems".

Last week, Washington put a freeze on its joint F-35 fighter jet programme with Turkey in protest over the S-400 deal. Turkey planned to buy 100 F-35A fighter jets, with pilots already training in the US.

The plane's manufacturer, Lockheed Martin, said that contracts with Turkish companies to build parts for the F-35 had been expected to reach $12 billion.

Washington has said Turkey's role in the manufacturing of the F-35s can be replaced.

"It is wrong to say 'we will take Turkey out' of this programme," Cavusoglu said.

Ties between Ankara and Washington have been damaged in the past few years over American support for a Syrian Kurdish militia viewed as terrorists by Turkey, while the US has expressed concern over US mission employees and citizens in Turkish custody.