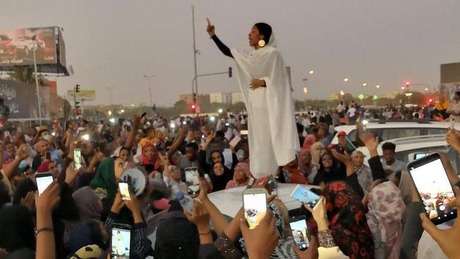 A Sudanese woman propelled to internet fame earlier this week after leading powerful protest chants in the capital told AFP Wednesday that women are key to the uprising against President Omar al-Bashir's iron-fisted rule.

"Sudanese women have always participated in revolutions in this country," Alaa Salah said after footage went viral of her standing on a car, singing and conducting crowds outside the army headquarters in Khartoum.

"If you see Sudan's history, all our queens have led the state. It's part of our heritage."

In the clips, the elegant Salah stands atop a car wearing a long white headscarf and skirt as she sings and works the crowd, her golden full-moon earrings reflecting light from the fading sunset and a sea of camera phones surrounding her.

"I'm very proud to take part in this revolution and I hope our revolution will achieve its goal," added the engineering and architecture student at Sudan International University.

Dubbed online as "Kandaka", or Nubian queen, she has become a symbol of the protests which she says have traditionally had a female backbone in Sudan.

Her new-found fame pushed her to set up her own Twitter account in which she thanked everyone "from the bottom of my heart. The struggle for a democratic and prosperous Sudan continues".

In another tweet Wednesday she says she "wanted to get on the car and speak to the people ... speak against racism and tribalism in all its forms, which affects everyone across all walks of life.

"I wanted to speak on behalf of the youth. I wanted to come out and say that Sudan is for all."

Demonstrators have been camped outside the military complex for days asking the army to back them in demands that Bashir step down.

Woman have made up a large part of the demonstrators that since Saturday have thronged outside the sprawling army complex.

Braving regular volleys of tear gas, the crowds have been the biggest yet to rally against Bashir's rule since unrest broke out in late December.

"In such movements, women are widely participating not only for their rights but for the rights of the entire community... there's no difference between women's rights and community rights," Salah told AFP.

"Women of Sudan always encourage their youths to fight. This is part of the history of Kandaka," she added.

Salah said she has taken part in the protests since they first erupted on December 19 in response to a government decision to triple the price of bread.

The unrest quickly morphed into a nationwide campaign against Bashir's rule with rallies held across cities, towns and villages.

The longtime leader has remained defiant and imposed a slew of tough measures including a state of emergency across the country.

Officials say 49 people have died in protest-related violence so far.