UN Appeals for Urgent Release of Migrants Trapped in Libya 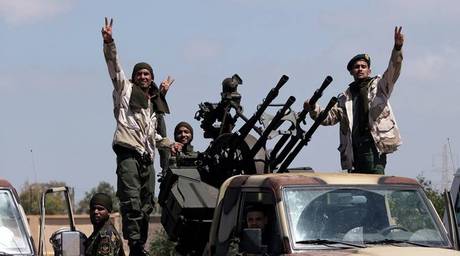 The United Nations on Friday urgently appealed for the release and evacuation of more than 1,500 detained refugees and migrants caught in the crossfire of escalating fighting sparked by a self-styled Libyan army commander's military campaign to take the capital.

The U.N. refugee agency said the refugees and migrants are believed to be trapped in detention centers where hostilities are ranging.

The oil-rich North African country is now governed by rival administrations — a U.N.-backed government in the capital Tripoli and the west, and the self-styled Libyan National Army in the east led by Field Marshal Khalifa Hifter who launched the major offensive earlier this month.

U.N. spokesman Stephane Dujarric said fighting continued Friday on the outskirts of Tripoli, with reports of increased use of heavy artillery.

He said U.N. humanitarian officials report that almost 10,000 people have fled their homes in areas affected by the ongoing fighting.

"We are concerned about the impact of these clashes on the already difficult living conditions of ordinary Libyans," he said.

Dujarric said local evacuation teams have received requests to move some 3,800 people to safer areas, "but only 550 people have been evacuated so far due to access restrictions caused by hostilities."

U.N. High Commissioner for Refugees Filippo Grandi said the refugees and migrants in detention centers are "in the most vulnerable and dangerous of circumstances."

"They have fled conflict or persecution in their own countries only to be trapped as conflict engulfs them again," he said in a statement. "The risks to their lives are growing by the hour. They must be urgently brought to safety. Simply put, this is a matter of life or death."

UNHCR said detention centers in proximity to the fighting include the Ain Zara, Qasr Bin Ghasheer and the Abu Sleim facilities, all located south of Tripoli.

Because of security and access issues, UNHCR said it has only been able to relocate 150 refugees from the Ain Zara center.

UNHCR said it tried to relocate all 728 refugees and migrants detained in the Qasr Bin Ghasheer facility to the Zintan detention center away from the clashes on Thursday but they refused, asking instead to be evacuated out of Libya.

But the refugee agency said currently, evacuation possibilities from Libya are extremely limited.

"We call upon the international community to advocate with all parties to the conflict to respect international legal obligations and to support measures to put an end to detention, while also providing solutions for people trapped in Libya, including humanitarian corridors to evacuate those most vulnerable out of the country," UNHCR said in the statement.

Libya slid into chaos after a NATO-backed uprising that toppled and later killed longtime dictator Moammar Gadhafi in 2011. Elections were held shortly after Gadhafi's demise, but failed to bring stability.

In addition to being governed by rival administrations, Libya has also become a haven for armed groups, including several from neighboring countries and a major conduit for African migrants hoping to reach Europe.

Hifter's offensive has led to clashes with rival militias that support the U.N.-backed government in Tripoli.

The escalation has threatened to plunge the fractured nation deeper into chaos.

A spokesman for Hifter's Libyan National Army said that ousted Sudanese president Omar al-Bashir and his associates had been supplying the U.N.-backed militias with arms and fighters.

Ahmed al-Mesmari said in a televised statement late Friday that two military planes took off from Sudan's capital Khartoum on March 28 carrying insurgents, "weapons and ammunition" and landed at Tripoli's Matiga air base controlled by the militias.

Al-Mesmari expressed support for the Sudanese military, which detained al-Bashir in a military coup and took power.