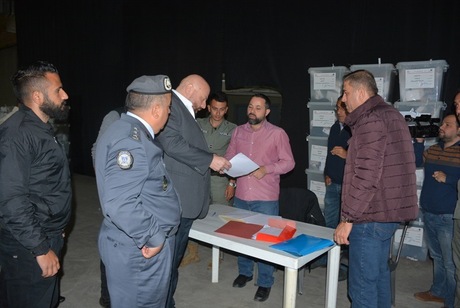 The northern city of Tripoli prepares for its by-elections on Sunday with Prime Minister Saad Hariri touring the city encouraging people for a massive turnout.

On Saturday, North Lebanon Governor Ramzi Nohra oversaw the distribution of ballot boxes to heads of the polling stations at the Rashid Karami International Fair under the supervision of the Internal Security Forces, said the National News Agency.

“The election process will take place in 55 polling stations distributed in Tripoli, Qalamoun, Beddawi, al-Mina and Wadi al-Nahle,” said Nohra, noting that the distribution of ballot boxes “went smoothly without any mistakes”

“The security situation is under control by Lebanon’s armed forces, the ISF and other security agencies to ensure a swift election process,” he added.

Tripoli by-elections will be held to fill a Sunni MP seat that went vacant after the Constitutional Council annulled the parliamentary membership of al-Mustaqbal Movement MP Dima Jamali after an appeal submitted by rival Taha Naji.