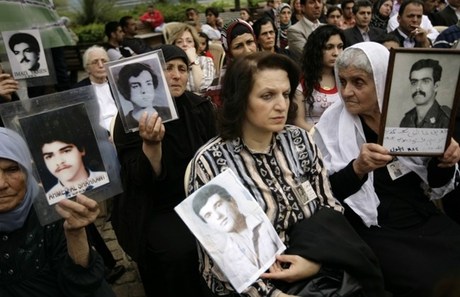 As Lebanon marks 44 years since the start of its civil war on Saturday, families whose loved ones disappeared during the conflict hope they might finally get some answers.

The small multi-confessional country passed a landmark law in November to determine the fate of thousands of Lebanese who went missing in the 1975-1990 war.

But political parties once involved in the fighting must now encourage followers with key data such as the location of mass graves to come forward to help.

Wadad Halwani, who heads the Committee of the Families of the Kidnapped and Missing, says the new legislation has given grieving relatives a glimmer of hope.

"It's the first time we commemorate the war with a law to enshrine the right to know... the fate of all the missing, dead or alive," she said.

More than 150,000 people were killed during Lebanon's civil war and some 17,000 people went missing, according to official figures.

Halwani's husband was among them, abducted, never to return.

For more than a decade, she and a dozen other women have regularly protested in the garden outside the UN headquarters in Beirut, clutching faded photographs of their long-gone loved ones.

The new law is "crucial to allow relatives of the missing to move on with their lives like everyone else, instead of wasting them waiting", she said.

Law 105 gives families the right to know the place of abduction or detention of their loved one, as well as the whereabouts of their remains and the right to retrieve them.

To do this, the cabinet must set up an official commission of inquiry to gather testimonies and investigate mass graves.

But five months on, nothing has been done.

Former lawmaker Ghassan Moukheiber, who co-drafted the law, said political will was key to moving forward.

The "decision to pass this law now needs to be translated into appointing a commission and facilitating its work", he said.

The probing body is to include, among others, family representatives, lawyers, an academic and a forensic doctor.

Once formed, its first task should be to draw up a unified list of all those missing, Moukheiber said.

They will have to "track down... those still alive and work towards their return, as well as retrieving the remains of those killed or dead", he said.

The International Committee of the Red Cross has said it is willing to hand over all information and DNA samples it has collected into a database on the missing since 2012.

But what Moukheiber describes as the commission's "purely humanitarian" mission is also a highly sensitive one.

After Lebanon's war ended, parliament in 1991 passed a general amnesty law that saw former warlords breathe a sigh of relief and move on to politics.

"A number of parties that were once militias and have... a past of war crimes have started to at least tentatively fear this commission's future work," Moukheiber said.

With numerous groups implicated, choosing where to start will also be delicate.

"In what mass grave should the inquiry begin?" asked the former lawmaker.

"There are burial grounds all over Lebanon, in every area once under control of" an armed group, he said.

"Choosing where and how to exhume these graves will require wisdom and courage."

All previous calls to investigate the fate of Lebanon's missing have come up against uncooperative political parties and inactive governments.

Researcher Lokman Slim, who has spent years gathering data on the missing, says there was little chance the commission would produce tangible results.

"That a political authority with blood-drenched hands actually voted on this law just means that it doesn't fear its consequences," said the head of the Umam Documentation and Research centre.

"It knows very well that, as with so many issues in Lebanon, the law will simply remain ink on paper."

"In parliament, in government, in the circles of Lebanese leaders, there are dozens... who have the detailed information we need about the fate of the missing or locations of mass graves," Slim said.

But he says he doubts the law's ability to spark collective introspection into "what led them into a bloody war" in the first place.

Relatives of the missing, however, are determined.

"Successive governments have accused us of pouring salt into old wounds," said Halwani.

But "the whole of society needs to know the truth because it's the only way forward towards real reconciliation", she added.

nothing civil about that war