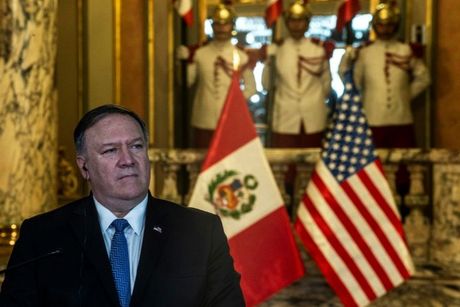 US Secretary of State Mike Pompeo ended his tour of South America on Sunday with a brief visit to the Colombian border city of Cucuta, crossed through by thousands of Venezuelans fleeing crisis under President Nicolas Maduro.

After attending a Sunday service in the Peruvian capital Lima, the chief US diplomat set off for the final leg of his tour of South America, which began Friday in Chile.

In Cucuta, where he met with refugees alongside Colombian President Ivan Duque, Pompeo called upon Maduro to open the border to allow humanitarian aid to enter -- and step down.

"Open these bridges, open these borders, you can end this today," he said.

That came after National Assembly leader Guaido declared himself interim president on January 23, kickstarting a power struggle with Maduro -- of which the entry of humanitarian aid has been a defining issue.

Pompeo promised that the US would continue to use all political and economic means to help Venezuelans.

All four countries featured on his itinerary -- Chile, Paraguay, Peru and Colombia -- are led by right-wing or center-right leaders favorable to Washington's uncompromising approach to Maduro.

On Saturday, Pompeo paid tribute to Peru's welcome for hundreds of thousands of Venezuelan refugees. But he became irritated when a reporter asked if that contradicted US President Donald Trump's harsh immigration policy at home.

"Peru has felt first-hand the effects of the disastrous Nicolas Maduro and the pain that he has brought to the Venezuelan people," he said, following talks with President Martin Vizcarra and Foreign Minister Nestor Popolizio.

He added that Peru had shown "enormous leadership in responding to this challenge."

Over three million Venezuelans, around 10 percent of the population, now live outside the crisis-hit country, ravaged by shortages of food and medicine and repeated power outages. The United Nations predicts that number will hit 5.3 million by the end of 2019.

Peru has received the most Venezuelans after Colombia: 750,000, according to Popolizio, testing the capacity of the country's public services.

In Chile, whose biggest trading partner is Beijing, he warned of links between Chinese trade and "their desire to steal intellectual property, to have forced technology transfer, to engage in activity that is not economic."