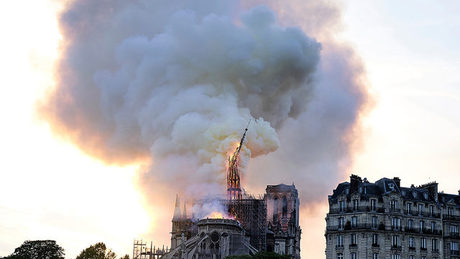 Investigators were working Tuesday to identify the source of a massive blaze that devastated the Notre-Dame cathedral in Paris, as church officials inspected the damage from a disaster that has sent shockwaves through France and the world.

Donations and offers of help began to pour in on Tuesday as day broke over the City of Light, revealing the extent of the damage from Monday night's inferno which took around 15 hours to extinguish.

"All night long I saw men going past with tears in their eyes. I described it this way: It was total chaos, but we can't let it knock us down," said Philippe Marsset, the vicar general of Notre-Dame.

French President Emmanuel Macron had also struck a defiant tone on Monday night as he visited the scene with his wife Brigitte, telling reporters: "We will rebuild Notre-Dame because it is what the French expect."

Around 400 firefighters battled through the night to control the flames, declaring only at around 10 am on Tuesday that it had finally been extinguished.

A public appeal for funds was launched by the privately run French Heritage Foundation to help restore a "symbol of French history and culture".

"We have everything to be able to rebuild it in exactly the same way," Culture Minister Franck Riester told France Inter radio, adding that the government was looking at ways to encourage donations.

Thousands of Parisians and tourists had watched in horror from nearby streets as flames engulfed the building and officials tried to save as much as they could of the cathedral's countless treasures, built up over centuries.

The inferno destroyed two-thirds of the roof of the 850-year-old UNESCO world heritage landmark, whose spectacular Gothic spire collapsed as orange flames and clouds of grey smoke billowed into the evening sky.

Attention was expected to turn to the source of the fire, which occurred during renovation work to overhaul the spire that had suffered damage inflicted by weather and pollution.

Investigators began interviewing witnesses overnight and are treating the case as an "involuntary fire", not arson.

Firefighters have said the renovation work could be to blame, and the fire started in an area of the roof that was below scaffolding.

One firefighter suffered injuries during the blaze, which at one point threatened to bring down one of the two monumental towers on the western facade of the cathedral that is visited by more than 12 million tourists each year.

Late on Monday night, to the relief of the nation, Paris fire brigade chief Jean-Claude Gallet had declared that "we can consider that the main structure of Notre-Dame has been saved and preserved," as well as the two bell towers.

But culture minister Riester warned that the structure remained unstable and that no one had yet been able to fully inspect the extent of the fire and water damage inside.

"We'll have to wait for a while to do a full inventory," he said, adding that the organ appeared to have been "badly damaged" as had many paintings and frescos.

The Holy Crown of Thorns and a sacred tunic worn by 13th-century French king Louis, two irreplaceable artifacts, had been rescued along with the church's main crucifix, and placed with others at the Paris town hall.

The sense of shock at the damage was palpable in France and stirred reactions from governments across the world.

"Notre-Dame survived all the wars, all the bombardments. We never thought it could burn. I feel incredibly sad and empty," said Stephane Seigneurie, a consultant, as he watched the fire from a nearby bridge.

Gasps and cries of "Oh my god" erupted around an hour after the fire first broke out when the top portion of the church's spire came crashing down.

Historians expressed dismay at the collapse of a building that has been a symbol of France for almost a millennium.

"If Paris is the Eiffel Tower then France is Notre Dame. It's the entire culture, entire history of France incarnated in this monument," Bernard Lecomte, a writer and specialist in religious history told BFM TV.

The cathedral has figured as a central character through the ups and downs of French history since construction began in mid-12th century.

During the French Revolution in the 18th century, it was vandalised and plundered, but would go on to feature as a central character in a Victor Hugo novel published in 1831, "The Hunchback of Notre-Dame" which is credited with helping save it.

It survived the devastation of two global conflicts in the 20th century and famously rang its bells on August 24, 1944, the day of the Liberation of Paris from German occupation at the end of the World War II.

The Vatican expressed its "incredulity" and "sadness" over the fire.