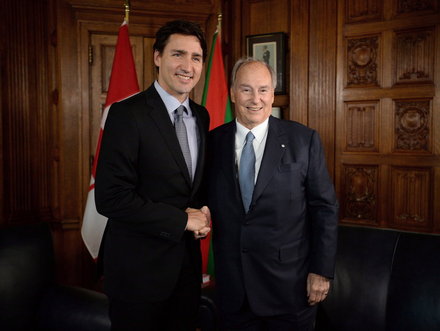 A federal judge in Canada Tuesday ordered the lobbying commission to take a second look into whether the Aga Khan violated rules by hosting Prime Minister Justin Trudeau at his private island in the Bahamas.

The court ordered the Commissioner of Lobbying "to re-examine the actions of everyone at the Aga Khan Foundation with 'a broad view of the circumstances,'" read a statement by the watchdog group Democracy Watch.

In January 2018, Democracy Watch challenged a 2017 lobbying commissioner's ruling stating that the Aga Khan's hosting of Trudeau was legal, even though the billionaire philanthropist's foundation is registered as a lobbying group.

According to the federal court, the 2017 ruling was "a narrow, technical, and targeted analysis that is lacking in transparency, justification, and intelligibility," and ultimately was "unreasonable."

Trudeau was quick to react. "We trust in the processes in place and respect the work that the court and the lobbying commissioner will do," he said at a press conference.

Trudeau and his family vacationed at the billionaire's island in December 2014, before he became prime minister, and again between December 2016 and January 2017, after he became Canada's leader.

Trudeau said that it was a personal family trip, and that the Aga Khan is a long-time family friend.

Canada's ethics commissioner concluded in December 2017 that Trudeau had indeed violated conflict of interest rules. At the time the prime minister said he assumed responsibility for the mistake.

With elections months away in Canada, Trudeau has been under fire since February, when former attorney general Jody Wilson-Raybould accused him and his inner circle of applying political pressure to prevent a trial of engineering giant SNC-Lavalin, which is accused of corruption in Libya.