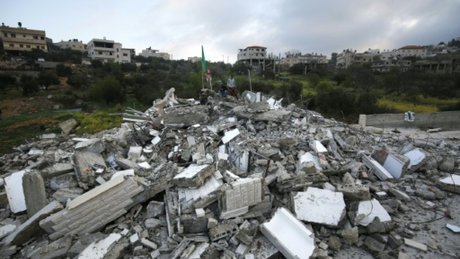 Israeli forces destroyed the home on Wednesday of a Palestinian who was killed during his attempted arrest on suspicion of carrying out a December shooting.

Seven peopls were wounded in the December 9 attack near the Israeli settlement of Ofra in the occupied West Bank, one of them a pregnant woman who gave birth prematurely to a baby who later died.

The suspected gunman, Salah Barghouti, was killed as security forces attempted to arrest him in a December 12 raid.

On Wednesday, border police and defence ministry officials "demolished the apartment in which Salah Barghouti lived" in the village of Kobar, north of the West Bank city of Ramallah, the army said.

Border police already razed the home of Barghouti's brother, Assam, in the same village on March 7.

Assam Barghouti faces trial in the December 13 killing of two soldiers in a separate shooting nearby.

He is also accused of helping his brother carry out the Ofra attack.

The armed wing of Islamist movement Hamas, which controls the Gaza Strip and has fought three wars with Israel since 2008, claimed Salah Barghouti as one of its "fighters."

Israel routinely demolishes the homes of Palestinians accused of carrying out attacks against its citizens.

It says the measure acts as a deterrent to future attacks but human rights groups condemn the practice as collective punishment since family members suffer from the actions of relatives.