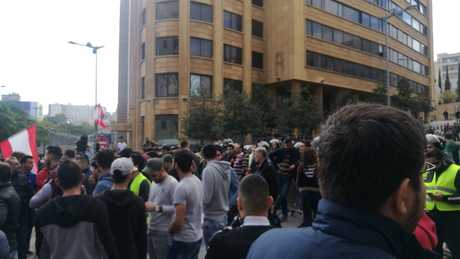 Lebanese University teachers, civil servants and the Union Coordination Committee staged a sit-in on Wednesday protesting a government’s proposal to cut their wages as part of measures to reduce spending and slash the budget deficit.

The protesters gathered in Riad al-Solh Square in Beirut in parallel with a legislative session held in Parliament.

Later in the day, the state-run National News Agency said it is committed to the strike and that it will only cover news related to protests that will be held across Lebanon.

State hospitals and most of the state’s institutions including the National Social Security Fund followed suit and joined the strike.

As part of government plans to reduce budget deficit, suggestions emerged that pay cuts might be imposed on salaries of public sector employees and retirees.

It surfaced after remarks made by Froeign Minister Jebran Bassil last week, he said: “If the government doesn't reduce wages there will be no more salaries, no economy and no Lebanese Lira.”

The legislative session convened to discuss 19 items on the agenda including the electricity plan and establishing special economic zone in the Batroun district and another in the district of Tyre along with the current one in Tripoli.

Correction dweeb the port of Beirut as well as the airport and the Masnaa are all controlled by Kizballah. You need spend more time reading and less time on your gameport. Fact of the mater is that people in lebanon will only conglomerate if they feel that their livelyhood is impacted by the rotten government in power. But they would not spend a nano second if it meant that they need to revolt for the sake of the nations sovereignty.

One of these days people will learn to get 70-80% of their present income is preferable than get 0% after the organisation goes bankrupt.