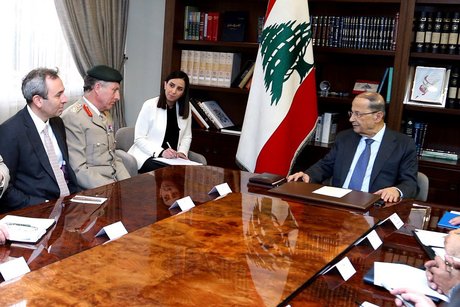 Carter reiterated his country’s “continued support for Lebanon’s government and its armed forces,” it said.

In February, the UK made a decision to outlaw the political wing of Hizbullah. It announced it would seek to make membership of the movement or inviting support for it a crime.

But UK officials have asserted that the move won’t impact the Lebanese government or its people.

British Minister of State for the Middle East at the Foreign & Commonwealth Office, Alistair Burt said that "British ties with Lebanon will remain intact despite the British decisions against Hizbullah."

Arent we the lcuky ones to have a brizedent baba of all who has subbort from all on his country! no wonder we have clean running eater, clean and new roads, no garbage in site and electricity at least 25hrs per day. Yes he deserves all this subbort!
Conversely these visiting dignitaries think great we say a few good words and stay away from their problems and we can get to land there and eat their food for free while making the empire look good.