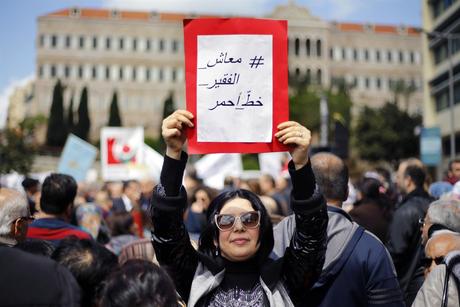 In the midst of street protests rejecting the possibility of salary cuts of state employees as part of austerity measures to reduce a ballooning budget deficit, economic experts say the measure would reduce the deficit but could also trigger an economic recession, al-Joumhouria daily reported on Thursday.

Public sector employees fear that the reduction of the budget deficit will come at their expense by deducting a percentage of their wages which increased after the government approved a long awaited wage scale.

Economic expert Mazen Suweid told the daily that reducing the salaries of the public sector has several disadvantages.

“It was better not to approve the wage scale instead of giving the employees this right and then pulling it back. Many employees took bank loans based on their new salaries, so the deduction of salaries will be a negative shock on incomes and will undoubtedly have repercussions on the economy,” he said.

In terms of the expected advantages, he said: “We hope to avoid the economic disaster we are coming upon threatening of bankruptcy of the state.”

“Cutting part of state employee wages is a necessary step, but not enough alone. It must be accompanied by a series of reforms with some savings from the electricity sector estimated at $2 billion, the deficit will fall from $ 8 billion to $ 6 billion,” he said, noting that banks have a tendency to offer IPO’ at zero interest rate.

In response to a question, Suweid stressed that the wrong approach adopted by the successive governments in the past years is what led us to the situation today, “the previous governments did not determine their economic priorities and here we are today paying the price.”

For his part, economic expert Louis Hobeika told al-Joumhouria: “The increase in public sector salaries about two years ago contributed to the improvement in purchasing power, but today, while talking about the deduction possibility, we note that the consumer movement has stepped backward. This step has very bad psychological, economic and financial repercussions.”

Notice how politicians and retired politicians and their families won’t be impacted by the evil measures they’re planning. The same applies to retired army and cops officers who keep their salaries and privileges.

This is very interesting. https://aawsat.com/english/home/article/1684596/salaries-5000-employees-could-reach-4-million-month.
Ok so someone told me that to get a job with the Lebanese customs you pay the powers be$45K USD and you get a job. You will be able to pay back what you spent to get the job within a month from the bribes and theft you carry out. So instead of customs collecting duties the employees do. If this is true Lebanon is finished

The link isn’t working properly. Could you try it again?

I’m not surprised, I know people who imported cars stuffed with goods from the US without paying anything .

Not sure why its not working but you can find the article at the arab world at https://aawsat.com/english

It worked now. Thanks.

We can keep complaining turn we turn blue in the face unless people step out into the open and demand change like the rest of the middle east nothing will....

Agree but one issue is the Lebanese still think around sectarian lines. Perfect example when noise started about Fouad Saniora the Sunni Mufti declared him a red line. So every sect has a red line so good luck getting justice...

True CL, its the people that placed these officials into power and the same people should be able to remove them. substitute the word people for the word sheep and you have Lebanon.