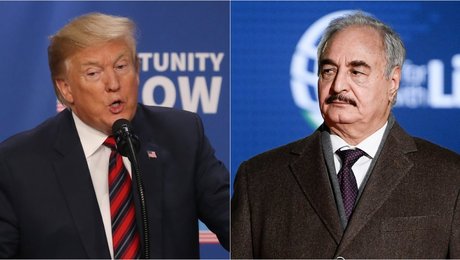 The White House revealed Friday that President Donald Trump reached out personally to Libyan warlord Khalifa Haftar, as a push at the United Nations to broker a ceasefire hit trouble.

Observers see Trump's words of praise for the strongman, at the expense of internationally-recognized leader Fayez al-Sarraj, as evidence of US support that explains Haftar's determination to pursue his offensive to seize Tripoli.

Trump and Haftar spoke on Monday "to discuss ongoing counterterrorism efforts and the need to achieve peace and stability in Libya," according to the White House.

The White House did not say why it delayed giving news of the phone call.

- Fighting till the end -

Haftar, seen by his allies Egypt and the United Arab Emirates as a bulwark against Islamists, has declared he wants to seize the capital, now controlled by a UN-recognized government and an array of militias.

The military commander backs a rival administration based in eastern Libya that is refusing to recognize the Tripoli government's authority.

On Thursday, Russia and the United States opposed a British bid backed by France and Germany at the UN Security Council to demand a ceasefire in Libya.

Russia insisted on having no criticism of Haftar in the proposed resolution, while the United States said it wanted more time to consider the situation.

Diplomats say the signaling from Washington goes a long way toward explaining Haftar's aggressive strategy in the face of strong condemnation by the European powers and the UN.

"Haftar believes he has to fight until the end," said one diplomat at the UN speaking on the condition of anonymity.

Despite some military setbacks, Haftar maintains that he "can prevail," according to several others.

News of Trump's phone call "clarifies" the US position, noted another diplomat, after Britain fought in vain for five days to try to pass a resolution calling for a ceasefire and unconditional humanitarian access to the combat zones.

Sarraj, whose control over his country remains extremely tenuous, is backed by Qatar and Turkey.

Haftar would not have unleashed his offensive without a green light from his backers, and getting him to back down from the "impasse" will depend on their will, the diplomats said.

Whatever the outcome of the British resolution, the evolution of the diplomatic game around Libya has undercut the UN's authority.

The launch of the offensive coincided with UN Secretary-General Antonio Guterres's visit to Libya to push for a national reconciliation conference.

That conference was hastily canceled by the UN's representative to Libya Ghassan Salame, who just this week described Haftar's military operation as a "coup d'etat." Both his credibility and that of the UN are on the line if Haftar wins power.