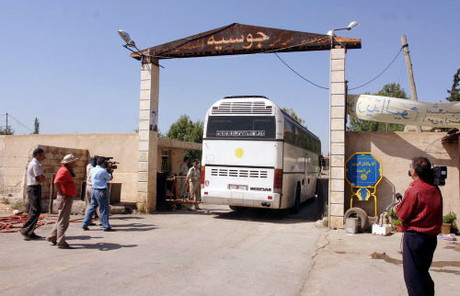 Lebanese authorities have reportedly been warned about border smuggling from Lebanon into Syria that reportedly revived lately in light of Syria’s fuel shortage, pan-Arab al-Hayat daily said on Saturday.

Sources told the newspaper that smuggling of Syrian goods competing with Lebanese agricultural productions was mainly active earlier, and that due to Syria’s fuel shortage, smuggling has taken an opposite direction.

“Lebanese Armed Forces were monitoring the border to prevent smuggling to Lebanon in recent months, but the crisis of fuel shortage in Syria and the need for gasoline supply and food as a result of the imposed siege, raises the necessity that security forces control the border to prevent the violation of the Western siege imposed on Damascus regime since the beginning of the year,” the sources told the daily.

Other sources told al-Hayat that fuel traffickers initially managed to pass some quantities to Syria, but these smugglers soon stopped because of a difficulty in having banks accept the remittances they received for their services.

However, “smuggling attempts remained active at illegal crossings,” added the newspaper, noting that “Lebanon was informed of the need for control measures.”

Syria's government has been facing a flurry of international sanctions since the conflict started in 2011, including over the import of petroleum-related products.

Early in April, the ministry of petrol and mineral resources said it was temporarily slashing the daily cap on subsidised petrol by half, from 40 to 20 litres per vehicle.

Later pumping stations said they received another memo from the ministry instructing them to further half the supply of fuel to 20 litres every 48 hours.

“Lebanese authorities have reportedly been warned” by whom?

“Sources told the newspaper” ? Are they Lebanese sources?

There’s nothing wrong in flooding the Syrian market with our goods, the Syrians have been raping and plundering Lebanon since he 1970s.

This doesn’t even qualify as payback .

The shoe is on the other foot now lol, for years Syrias military who managed Lebanon controlled the racket that created shortages and supplied the demand through their chain from Syria. Now it seems the same business has been revived but the flow is going the other way. Corruption is what were all about Syria, Lebanon and the rest of the Arab world. Meanwhile we wash our feet before prayer and kneel below the cross for forgiveness and all will be well by morning....