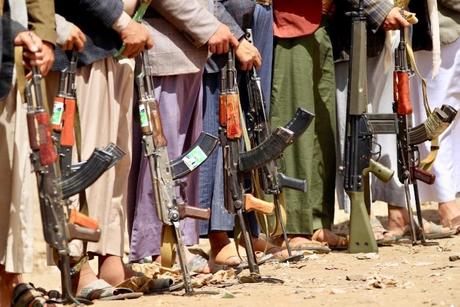 The Saudi-led coalition launched an air raid Saturday on a cave in the Yemeni capital Sanaa, used by Huthi rebels to stockpile drones, a spokesman said.

The cave near the presidential palace in Huthi-held Sanaa contained drones to be used in "terrorist operations", Colonel Turki al-Maliki said.

The "military target, a cave used by the terrorist Huthi militia to stockpile drones was destroyed," he said, in a statement carried by the official Saudi Press Agency.

Earlier this month, the coalition said that Saudi air defences intercepted two drones launched by Huthi rebels from Yemen that targeted Khamis Mushait, home to a major airbase in the southwest of the kingdom.

And in January the Huthis launched a drone attack on Yemen's largest airbase, Al-Anad, north of the southern port of Aden, during a military parade.

Eleven people were wounded in the attack, including Yemen's deputy chief of staff Major General Saleh al-Zandani who later died of his injuries.

Seven other loyalists -- including a high-ranking intelligence official -- were killed in the attack.

Yemen is mired in a grinding conflict between the Iran-aligned Huthi rebels and a government backed up by a Saudi-led coalition.

The Saudi-led coalition launched its first raids on rebel strongholds in March 2015 in a bid to bolster President Abedrabbo Mansour Hadi, who now lives in Riyadh.

Since then the conflict has killed some 10,000 people, according to the World Health Organization, although human rights groups say the toll could be five times higher.

The unrest has also pushed the country to the brink of famine.