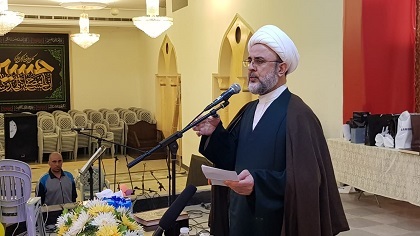 Hizbullah official Sheikh Nabil Qaouq said on Saturday that Hizbullah will not let the poor pay for the economic crisis, the National News Agency said.

“Hizbullah will not let a solution to the economic and financial crisis be made at the expense of the poor. Those who think of a solution from the pockets of the poor are merely creating a new crisis,” said Qaouq.

He said the crisis can be resolved “from the top of the pyramid, by stopping corruption and the waste of public funds.”

Hizbala is behind Lebanon’s impoverishment, why in the devil’s name a declamatory speech now?

He said the crisis can be resolved “from the top of the pyramid, by stopping corruption and the waste of public funds.”

I will personally convert to Shia and follow Hizbullah if they start implementing that policy... so say we all.

Here is the real danger here in this austerity policy. As the Lebanese Government retracts in public spending for the nation, the impact of Qaouq's statement is that Hezbollah (read Iran) will step into the breach and do public spending in lieu of the State.

It is the accelerated replacement of the State institutions with Hezbollah and at the end of the process Lebanon will be the total captive of Hezbollah. It is almost there now.

This is the ultimate price tag for the incredible corruption within the Lebanese State. It is being robbed blind by the former militia leaders dressed up as respectable government officials. They are doing now what they attempted during the war, but with out bullits and cannons. Unless they resolve the corruption, the end of the story is that Lebanon becomes an Iranian protectorate governed by Hezbollah, without even the pretense of a legitimate government of the Republic of Lebanon.

Beiruti, fortunately, their finances are running low and they cannot afford to do this...

the majority of the people are poor in Lebanon and this guy is talking to them basically telling all the sheep don't worry we will take care of you and the sheep will follow believing that they are been looked after by Hizballah...

Hizbullah is taking care of their poor by building schools, hospitals and social services... on the other hand they have sent hundreds of youth to die in a conflict we Lebanese should have remained out of it!

Because of the rape of the government by the wealthy who want ever more wealth, the poor go without and when austerity is called for by the government, it is to take away what little the poor have so that the thieves in government do not have to suffer a thing.

This renders the government, led by Mustaqbel to be seen as illegitimate in the eyes of the people, as they turn to Hezbollah for basic government services. And this is the problem.

I got something here I would like to donate to Kizballah.....

this whole crisis can be solved. Simply do an audit of all the spending going back at least 20 years ago and hold anybody and everybody accountable regardless of what party they belong to. Basically no red lines...

Great Canleb who will actually have the cojones to do that? The quisling president who swore to wipe out corruption if hes is ever brought to power or the axis in Lebanon that says nothing moves before Israel capitulates? or even better the 128 thieves who most have been there beyond the ages of most readers here?. No one is interested externally in a corrupt and bankrupt third world nation that is incapable of making change in its best interest. The only interest you have is with a few dictatorships who enjoy influence and affluence under the status quo and last they made a statement we heard from them is that they will eradicate corruption, provide basic services, liberate Israel and Lebanon is fine.