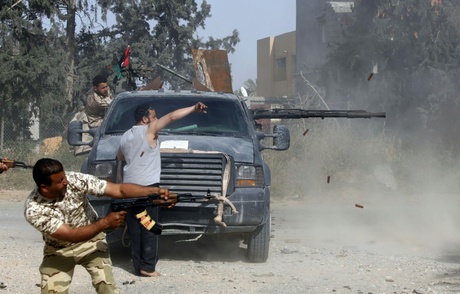 Forces backing Libya's unity government battled to push back an offensive by strongman Khalifa Haftar on Sunday as his troops approached the gates of Tripoli after air raids overnight.

Haftar's self-proclaimed Libyan National Army, galvanised by victories in its eastern stronghold and in the country's desert south, announced an offensive early this month to seize the capital from the UN-recognised administration of Fayez al-Sarraj.

But his forces have faced fierce resistance from armed groups backing the Tripoli-based Government of National Accord (GNA), including powerful factions from the western city of Misrata.

The bloodshed has derailed efforts to bring peace to a country where jihadists and people smugglers have exploited the chaos unleashed by the NATO-backed overthrow of dictator Moamer Kadhafi in 2011.

At least 227 people have been killed since Haftar's forces launched their offensive, the World Health Organization said Sunday, adding that a further 1,128 have been wounded.

Clashes intensified on Saturday when forces loyal to the GNA announced a counter-attack.

"We have launched a new phase of attack. Orders were given early this morning to advance and gain ground," said Mustafa al-Mejii, a spokesman for GNA forces.

Sustained rocket and shellfire could be heard in several districts of Tripoli on Saturday, after several days of less intense fighting and stalemate on the ground.

Explosions were heard from the city centre overnight, and some witnesses reported air strikes.

Pope Francis, delivering his traditional Easter message, called for an end to "conflict and bloodshed" that was killing "defenceless people" in Libya.

"I urge the parties involved to choose dialogue over force and to avoid reopening wounds left by a decade of conflicts and political instability," he said.

At least two flights were re-routed from Mitiga airport to Misrata, more than 200 kilometres (125 miles) to the east, the airport's authorities said on their Facebook page.

They said flights had resumed early in the morning to Mitiga, east of the capital.

The GNA counter-attack put pro-government forces back in control of Ain Zara, in the southern suburbs of Tripoli, where an AFP team confirmed pro-GNA forces had advanced, shifting the front line a few kilometres south.

GNA spokesman Mejii told AFP on Sunday morning that "after a long day of military success, our forces are consolidating their (new) positions."

Some witnesses spoke of air raids and drones, but Mejii said the blasts were caused by strikes from LNA helicopters aimed at "terrorising civilians".

He said they had not caused any casualties but had taken place away from the front lines, without offering any further details.

Military sources say the ageing Soviet and Russian fighter jets used by both sides are not equipped to carry out night time strikes, but Mejii said Haftar's forces have a helicopter with night vision capabilities.

The UN's Libya envoy warned Thursday of "a widening conflagration" in the North African country.

Ghassan Salame told AFP that "international divisions" prior to the assault on Tripoli had emboldened Haftar, who is backed by Russia and seen by his allies Egypt and the United Arab Emirates as a bulwark against Islamists.

The White House revealed Friday that US President Donald Trump reached out personally to Haftar, as a push at the United Nations to broker a ceasefire hit trouble.

Observers saw Trump's words of praise for the strongman as evidence of US support that explains Haftar's determination to pursue his offensive to seize Tripoli.

On Thursday, Russia and the United States opposed a British bid backed by France and Germany at the UN Security Council to demand a ceasefire in Libya.

Russia insisted on having no criticism of Haftar in the proposed resolution, while the United States said it wanted more time to consider the situation.