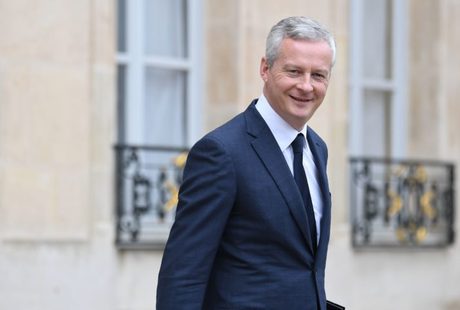 France's finance minister promised Friday that a new round of tax cuts announced by President Emmanuel Macron will benefit low-earners and would not bust the budget because spending cuts will be found.

Le Maire said that he was hoping 15 million households would benefit from the new measures, which come on top of a package of tax cuts and income top-ups worth 10 billion euros which was announced in December.

He suggested it would be achieved by "softening" the lowest bracket of income tax -- which is set at 14 percent -- saying the current level was "too brutal" and "dissuasive."

The second of France's five brackets of income tax -- set at 30 percent -- would also be adjusted, he proposed.

Cutting public spending to pay for the tax cuts is set to be a major challenge for Macron's centrist government, given the sensitivity in France about any changes to public services.

"On public spending, we will not let anything go," Le Maire promised, without being specific.

Macron suggested that some government agencies could be cut and proposed that more bureaucrats and public officials would be transferred from Paris to provincial France.

The tax cuts are also set to be financed by eliminating tax loopholes for companies, by encouraging people to work more, and by reducing unemployment, which has fallen on Macron's watch to 8.8 percent from 9.4 percent.

The French budget deficit is forecast to be 3.1 percent of GDP this year.

Reaction to Macron's speech, billed as a turning point for his presidency, was mixed on Friday.

"Macron has not renounced anything and intends on accelerating," wrote commentator Jean-Francis Pecresse in business newspaper Les Echos. "Emmanuel Macron has put some humanity into his liberalism but has not changed his strategy."

A poll carried out for Le Figaro newspaper found that 63 percent of people found Macron unconvincing and 80 percent thought the "yellow vest" protests would continue.