Despite Full Reservoirs, Iraq Water Woes Far from Over 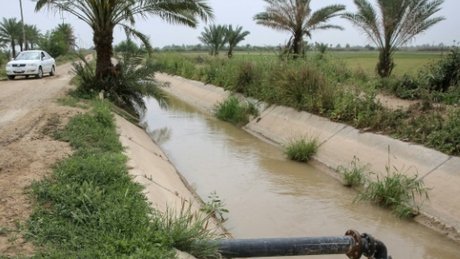 After plentiful winter rains, Iraq is heading into summer with overflowing reservoirs and lush marshes. But don't be fooled, observers warn: its water woes and related protests are not over.

Far from last year's shortages, "the land between the two rivers" is expected to hold 42 billion cubic metres (1.48 trillion cubic feet) in its reservoirs at the start of summer, more than twice the 2018 amount.

But that has not washed away longstanding challenges: poor infrastructure, few funds, sharing disputes with neighbours, climate change and population booms.

Nestled between palms and tall reeds north of Baghdad, the Al-Mashahada pumping station is punched through with bullet holes, its metal pipes and cisterns rusted.

Broken plastic pipes litter the dirt road leading up to it.

At another overgrown station nearby, a main tank leaks a steady stream, day and night.

These stations are par for the course in Iraq, whose water infrastructure dates back decades and has been worn by consecutive wars, sanctions blocking spare part imports, the US-led invasion and finally, the Islamic State group.

Parts of the network were installed over 60 years ago in soil that can be corrosive when wet, said Iraqi environmental expert Azzam Alwash.

"So you have a network with corroded pipes full of holes," he said, that could leak out as much as 60-70 percent of pumped water before it reaches households or farmlands.

Once there, it is hardly used responsibly, with farmers relying on wasteful flood irrigation and families leaving taps running unnecessarily.

In 2014, Iraq prepared a 20-year, $180-billion plan to manage its water crisis. But it was stillborn, as IS seized a third of the country the same year and money was diverted to fight it.

Despite IS's defeat in 2017, promised funds never came, he told AFP, and a new station is now being built by UN children's agency UNICEF.

"I couldn't afford pipes without them," Mahmud admitted.

It allocated nearly $760 million to the water ministry for this year -- about 60 percent higher than for 2018.

"It's reassuring, but it's just a good start," Mehdi said.

It remains one of the smallest ministerial budgets, around 15 times less than the electricity ministry.

Even Iraq's premier has admitted the water systems are not ready for summer, when temperatures in Iraq can reach a blistering 55 degrees Celsius (130 Fahrenheit).

"I would not be faithful if I said infrastructure is ready to receive all this," Adel Abdel Mahdi said, speaking in English.

Iraq's shortages can also be sourced beyond its borders.

Roughly 70 percent of its water originates from its neighbours, according to the International Energy Agency, with the Euphrates winding from Turkey through Syria, while the Tigris -- also from Turkey -- is fed by rivers from Iran.

As Turkey and Iran have developed their own dams and reservoirs, flows to Iraq have dropped.

"We used to get about 15 billion cubic metres of water a year from Iran, we no longer get that," due to dams and rerouted rivers, said Alwash, the expert.

And when Turkey fills its massive Ilisu dam, levels in the Tigris are expected to sink even further.

Iraq is negotiating with both neighbours to reach water-sharing agreements, but its position as a receiving country gives it little leverage.

Grinding on slowly behind the man-made disasters is climate change, with the World Bank predicting more severe droughts for Iraq starting in 2020.

"One year we have to deal with a drought, the next year we have floods. This is the climate extremism we see worldwide," said Kareem Hassan, manager of the massive Tharthar barrage north of Baghdad.

Despite Hassan's nod to climate change, his answer to how Iraq should respond was less reassuring: "It was God's will to bless us with rain this year, so we'll see what next year brings."

The apparent lack of planning is stark, considering Iraq's population of 40 million is projected to grow by another 10 million before 2030.

That will leave the country with a 37 percent deficit in its water supply, according to the Iraq Energy Institute.

That gap was already on Mahmud's mind as he looked at the fresh paint on Al-Mashahada's UN-funded station.

"It's great now, for the 300 families here. But in three years, there will be double that number here," he said.