Paris Police Clash with Protesters ahead of May Day March 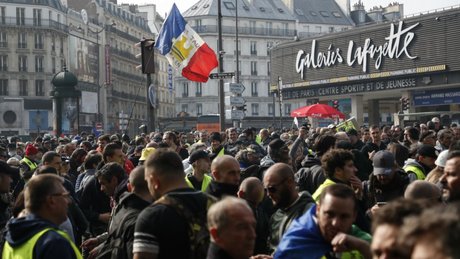 Riot police clashed with anti-capitalist protesters in Paris on Wednesday, firing tear gas to disperse them as thousands gathered for a May Day march in the city's south.

In a tense atmosphere, hundreds of so-called "black bloc" activists pushed to the front of the gathering crowd on Montparnasse Boulevard, hurling bottles and other projectiles at police in a confrontation some 90 minutes before the march was to start.

One protester suffered a head injury, an AFP journalist said.

A controversial riot control device, the grenade is thrown at ground level, releasing scores of rubber pellets that cause an intense stinging to the legs within a 15-metre (50-foot) range.

By late morning, police said some 88 people had been detained for questioning.

Six armoured vehicles and six water cannon were also on standby to be brought in if needed, a police source told AFP.