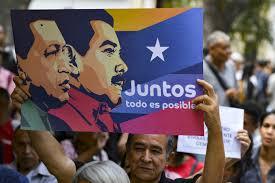 "Cuba needs to not be part of the problem in Venezuela, but become part of the solution," Freeland told reporters in a conference call.

"That is something that we are urging very strongly on the Cubans," she said. "I hope that they will see that that is the right approach for the people of Venezuela, for the hemisphere and for Cuba."

Freeland and most foreign ministers of 13 Latin American nations that -- with Canada -- form the Lima Group back Venezuela's self-proclaimed leader Juan Guaido.

After they met last Friday to discuss the crisis, Prime Minister Justin Trudeau spoke with Cuban President Miguel Diaz-Canel on behalf of the group.

According to a statement, Trudeau "underscored the desire to see free and fair elections and the constitution upheld in Venezuela."

"The two leaders also discussed ways they could work together to support a peaceful resolution to the crisis."