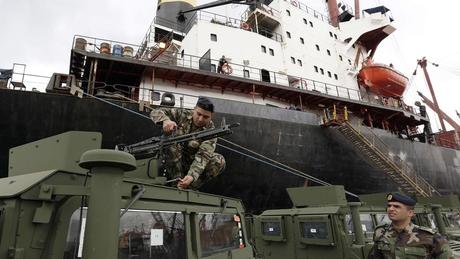 The French government confirmed Wednesday that a new shipment of weapons will head for Saudi Arabia, despite claims Riyadh is using the arms in the Yemen war.

Defence Minister Florence Parly told BFM television the weapons would be loaded onto a Saudi cargo ship scheduled to arrive Wednesday in the French port of Le Havre.

She refused to identify the types of arms, but reiterated France's stance that they have been used only for defensive purposes by Saudi Arabia since it began its Yemen offensive in 2015.

"As far as the French government is aware, we have no proof that the victims in Yemen are the result of the use of French weapons," Parly said.

Pressure has been mounting on the government after the investigative news site Disclose leaked a classified military note last month detailing the use of French tanks and artillery in the war against  Huthi rebels.

Disclose alleged the new shipment included eight truck-mounted Caesar howitzers, though a government source told AFP this week that such cannons were not part of the delivery.

Rights groups have accused Paris of being complicit in alleged war crimes against civilians in Yemen, where around 10,000 people have died and millions  been forced to the brink of starvation.

"The Saudi regime is one of the most brutal dictatorships in the world, and has inflicted a terrible humanitarian crisis on Yemen," said Andrew Smith of the Campaign Against Arms Trade NGO.

"The destruction would not have been possible without the complicity and support of arms-dealing governments," he said.

On Tuesday, all leftwing lawmakers exited parliament in protest after Genevieve Darrieussecq, secretary of state for the armed forces, said there was "no proof these weapons are being used against civilian populations".

France, the world's third-biggest arms exporter, counts Saudi Arabia and the United Arab Emirates as major clients and has resisted pressure to stop arms sales to the Gulf countries.

It is a marked contrast with Germany, which has suspended its weapon sales to Saudi Arabia since last October.

"France has strategic interests in this part of the world," Parly said Wednesday, adding that the latest shipments were part of "long-term partnerships with Saudi Arabia and the United Arab Emirates."

The United Nations says the Yemeni conflict is the world's worst humanitarian crisis, with 3.3 million people displaced by the fighting and 24.1 million in need of aid.