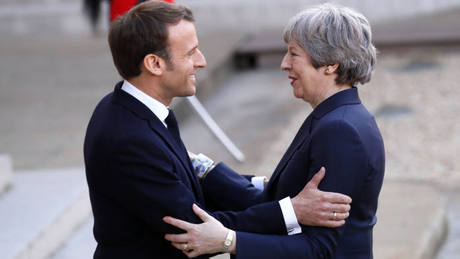 France opposes "repeated extensions" for Britain's exit from the European Union, a presidential official said Friday, keeping to the hard line of Paris on Brexit.

France does not want to enter into "a cycle of Brexit summits" following this month's European parliament elections which Britain will take part in after the deadline for its departure from the bloc was extended to the end of October, the official said.

The official, who asked not to be named, added that London should "have a solution before October 31" when Britain is due to leave the EU.

"The European elections could create a political shock that ends in a bipartisan agreement before June 30," the official said.

"But if the situation is not clarified before October 31, as the new commission is taking its place, we are not going to have a cycle of Brexit summits."

France under President Emmanuel Macron has shown increasing impatience with Brexit, worrying that the confusion is distracting from the EU's wider ambitions.

This has brought Paris into a rare conflict with its traditional EU ally Berlin which has generally pressed for a more tolerant approach on Brexit.

EU leaders, not including Britain, revealed a broad-brush statement of principles to guide them into the post-Brexit future at a summit in Romania on Thursday, promising a "new Union at 27 ready to embrace its future as one."