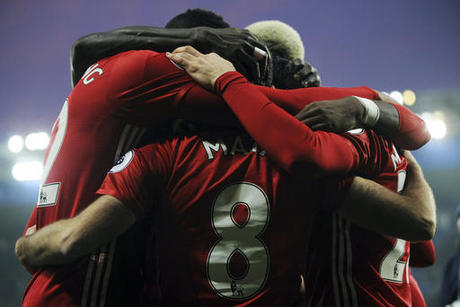 Manchester City jetted back to the Etihad to celebrate their stunning Premier League title triumph but across town at Manchester United the lights had long gone out.

Pep Guardiola's champions partied late into the night on Sunday in front of thousands of ecstatic fans after beating Brighton to win their second consecutive league crown, the first side to achieve the feat since United in 2009.

In that year Alex Ferguson's side celebrated a third straight title as the undisputed kings of English football while City, less than a year after their Abu Dhabi takeover, finished a lowly 10th.

It is difficult to overstate the dramatic nature of United's demise in recent years, which culminated in an embarrassing 2-0 defeat at Old Trafford at the hands of relegated Cardiff on Sunday.

United have finished outside the top four in four of the six seasons since Ferguson retired. This season the scarcely credible 32-point gap to their cross-town rivals left them as close to the relegation zone as the top of the table.

Manager Ole Gunnar Solskjaer enjoyed a prolonged bounce after taking over the reins from Jose Mourinho in December, winning 14 of his first 17 games in all competitions.

But, following an extraordinary comeback against Paris Saint-German to reach the Champions League quarter-finals, the wheels came off, with United winning just two and losing eight out of their final 12 games.

United ended up in sixth position -- exactly where they were when Mourinho was sacked -- and have had to watch as City were crowned champions, Liverpool and Tottenham reached the Champions League final and Chelsea and Arsenal set up a Europa League final meeting.

"We're not a club which should end up sixth," Solskjaer told Sky Sports. "That's where we are at the moment, but we're ready for it, the fans, supporters today too.

"It's near embarrassing when you walk off the pitch clapping them and get the support we have. That's the base of this club, the foundation is so great, we'll come back again."

Juan Mata is one of many who many United players who may have played his last game for the club.

"The feeling in the end is very bitter," the out-of-contract Spanish midfielder said in his weekly blog on his website.

"None of us are satisfied with the general performance levels that we have offered, for one reason or another."

United, with a bloated, underperforming squad, face a monumental challenge over the summer transfer window as Solskjaer plots how to turn around their fortunes and compete with City and Liverpool.

The wisdom of giving the relatively inexperienced Norwegian a three-year contract just over six weeks ago, a move that was followed by a dramatic decline in form, has been widely questioned by pundits.

Solskjaer's squad needs a radical overhaul after years of poor spending and drift.

However, they also face a battle just to keep hold of some of those who could make a positive contribution going forward with David de Gea, Marcus Rashford and Paul Pogba all out of contract in the next two years and holding out on signing new deals.

Hamstrung by their absence from the Champions League, United are reliant on their financial muscle to recruit new players and risk overspending in their desperation once more.

Alexis Sanchez, who apologised to fans for United's season of underachievement, is a symbol of the club's wasted millions.

The Chilean signed reportedly the most lucrative contract in Premier League history in January 2018 when joining from Arsenal, but United will struggle to get him off their books after another disappointing season, while the future of £75 million ($98 million) striker Romelu Lukaku also appears uncertain.

The clearout has begun with Ander Herrera and Antonio Valencia leaving on free transfers, but Solskjaer admitted on Friday it would be "miraculous" for United to be challenging City and Liverpool for the title next season.

"For ourselves, the short-term focus in the league will be getting into the top four," Solskjaer told BBC Radio 5 Live.

That limited ambition alone shows how far United have fallen since the days City lived in the Red Devils' shadow.