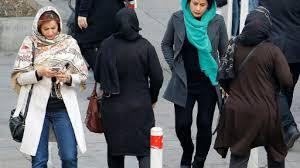 Clashes erupted between Iranian students at Tehran University on Monday during a demonstration against the enforcement of wearing hijab or Islamic veil, media reports said.

"A number of students gathered... claiming that morality police and security forces had entered the university" to warn students against failing to observe compulsory hijab laws, the semi-official ISNA news agency reported.

The agency reported that a vice president in charge of cultural affairs at the university had attempted to speak to the students but was "physically prevented" from doing so.

The vice president, Majid Sarsangi, denied any police or security forces had entered the university grounds.

But he said "two groups of students with opposing thoughts and ideals unfortunately clashed with each other while we tried to calm down the enraged students."

"The imposition of one type of attire on students... is a direct violation of their human rights," it added.

Fars news agency, which is close to ultra-conservatives, said scuffles broke out between the protesters and other students who supported the enforcement of hijab when demonstrators began marching in the grounds and shouting what it called "law-breaking slogans."

They "were shouting slogans against attire laws and observance of hijab," Ali Tolouie, the head of Tehran University Student Basij Organisation, told Fars, adding the protesters' statement "shows they are against Islam itself."

There were no reports of any casualties or arrests.

Following the 1979 Islamic revolution compulsory hijab was enforced throughout Iran with women forced to dress modestly and cover themselves with the Islamic veil.

Every year with the advent of the holy Islamic month of Ramadan authorities strictly enforce the mandatory Islamic dress code.

There have been a number of protests, mostly by women over the years, with the latest major protests being the "Dokhtaran-e enghelab", or the Girls of Revolution Street.

That particular protest began after an Iranian woman stood on a pillar box on Enghelab Avenue in December 2017 without the mandatory long coat and raised her white veil on a stick, an act that was copied by women in different cities in spite of arrests that followed.

Excuse me for being a non-Moslem and therefore not supposed to understand things such as the Koran, but can some Moslem religious authority please quote to me the exact surra in the Holy Book where it states that women have to wear at least a hijab.

“Tell the believing men to reduce [some] of their vision and guard their private parts. That is purer for them. Indeed, Allah is Acquainted with what they do.”

The Arab women of all faiths already used to cover their head but they used to show clevage and their neck etc but God told the believing women to let their headcover (khimar/hijab) cover their chest area as well. The hijab was already used but God specified how much it should cover in the Quran.

Mira we never got the memo lol. Where should this stop when man made laws dictate how women should act, dress and what next speak?