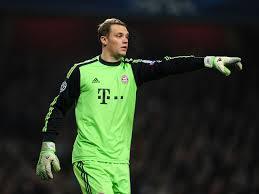 Bayern Munich goalkeeper Manuel Neuer has admitted that he may not be fit to play in Saturday's Bundesliga title decider against Eintracht Frankfurt.

The Bayern captain has been sidelined with a calf injury since mid-April, and had hoped to return to full fitness in time for last weekend's visit to RB Leipzig.

He is now in danger of missing the last league game of the season on Saturday, in which Bayern hope to wrap up a seventh successive Bundesliga title.

"I still have the Frankfurt game in my sights," said Neuer on Monday at a ceremony in which he was presented with a Bavarian state medal for the work of his children's charity, the Manuel Neuer Kids Foundation.

"Whether I can play or not I can't say. I am working hard on it and we will have to see how it looks from one day to the next," he said.

Two points ahead of title rivals Borussia Dortmund, reigning champions Bayern could still be dethroned if they lose to Frankfurt and Dortmund beat Borussia Moenchengladbach on Saturday.

Yet Neuer said he was "optimistic" that Bayern would win the title for the seventh straight year.

The 33-year-old goalkeeper also missed out on last season's title win, after missing most of the season with a metatarsal fracture.

Second-choice goalkeeper Sven Ulreich, who stepped in for Neuer both last season and in recent weeks, said that he was ready to play in Saturday's title decider.

"If Manu is able to train and play then he will play, but otherwise I will try to help the team, and I am preparing for that," Ulreich told Kicker magazine on Monday.