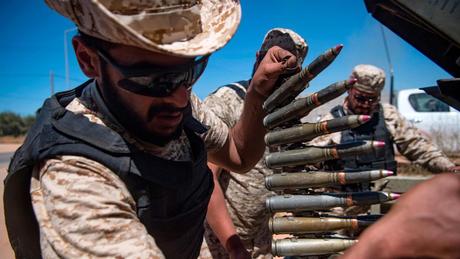 Peering through the gate of a home in the western suburbs of Libya's war-torn capital, seven-year-old Chehab shyly looked on as children streamed down the nearby street.

"I'll just play by myself," he muttered, holding a ball under one arm.

"I don't know anyone in this neighbourhood."

He is one of the more than 60,000 civilians who have fled their homes in Tripoli since early April, when forces loyal to commander Khalifa Haftar began their push to take the capital.

While some have found refuge at shelters throughout the city, many more have instead turned to relatives and even mere acquaintances as Libyans band together to find homes for the displaced.

Chehab and his family arrived at his uncle's home in Janzur in mid-April after fleeing the southern suburb of Ain Zara as it turned into a front-line battlefield.

Nearly a month later, his 10-year-old sister Alia misses the comforts of home.

"I want to go home and go back to school," she sighed.

"The school closed again because of the war and I had to leave my friends, my room and my toys."

Their father Abdelhafid would have liked to find a furnished apartment for the family to rent for the holy month of Ramadan, but it proved too expensive.

"I don't know what I would have done if my brother hadn't opened his door," the high school geography teacher said.

An initial lightning advance by Haftar's forces on April 4 was quickly bogged down by militias loyal to the UN-recognised unity government -- which is based in Tripoli -- as they rushed to defend the capital.

The fighting has killed 454 people and wounded more than 2,000 others, according to the World Health Organization.

The European Union warned Monday that Haftar's offensive on the capital was a threat to international peace.

But front lines have since largely frozen and the intensity of the fighting has dipped with the beginning of Ramadan.

The clashes are centred along the capital's southern gates, particularly in Ain Zara.

But the fighting also extends elsewhere, including the districts of Salaheddin and Khalat al-Ferjan, as well as Tripoli's international airport which was destroyed in 2014 fighting.

"Our main concern is with civilians living near the front lines," said Youness Rahoui, head of the International Committee of the Red Cross in Tripoli.

Habiba left her home near the airport in a hurry after neighbours told her they were fleeing the area.

For her, finding room with relatives or at a shelter were not options.

But her husband's friends came to the rescue, securing the family an apartment in the western neighbourhood of Siyahia that had once been used as an office by a foreign company.

The family sleeps on mattresses nestled between a clutter of desks and chairs, but Habiba still believes they are "lucky".

"Our loved ones often don't have the space or the means to welcome an entire family," she said, adding she hoped to join her husband who lives abroad.

"The school year is ruined anyway," she said, hinting that taking her children along for the journey would not affect their studies.

Classes have been suspended across the capital, and schools in several districts have been transformed into makeshift shelters for the displaced.

Many homes in the southern suburbs have been damaged or completely destroyed by the fighting.

But 29-year-old Hamza has stayed behind to "stand guard" against looters, while his family takes refuge with relatives.

He doesn't "feel comfortable staying at other people's homes," he told AFP by phone.

But he will need a break from guard duty in a few days, when his supplies run out.

"The past few weeks have been tough and I need a rest," he said.