Iran's Guard Says it Can Hit Warships in Region 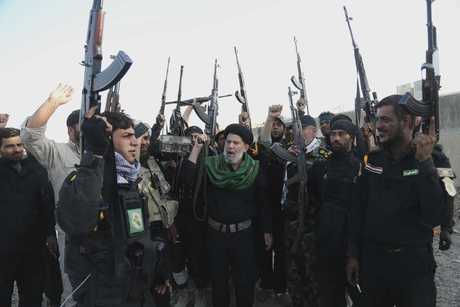 The Latest on developments in the Persian Gulf region and elsewhere in the Mideast amid heightened tensions between the U.S. and Iran.

An official with Iran's powerful Revolutionary Guard says Iranian missiles can "easily reach warships" in the Persian Gulf and elsewhere in the Middle East amid escalating tensions with Washington.

The Guard's deputy chief in charge of parliamentary affairs, Mohammad Saleh Jokar, was quoted by the semi-official Fars news agency Friday as saying that Iran's missiles with a range of 2,000 kilometers — about 1,250 miles— are capable of targeting any point within the region.

Washington has already warned shipping companies that "Iran or its proxies" could be targeting maritime traffic in the Persian Gulf. The U.S. has deployed the aircraft carrier USS Abraham Lincoln and B-52 bombers to the highly sensitive region to counter the threat.

Jokar further warns that a conflict would endanger the world's energy supply. He says: "If a war happens, the world will suffer."

A third of the world's oil supply is transported through the Persian Gulf.

On the other hand, the German Defense Ministry says it's resuming its military training mission in Iraq after a re-evaluation of the security situation determined the threat level had lessened.

The Ministry said Friday the re-assessment was a joint assessment by coalition forces serving in Iraq, which is led by the United States.

Last week, the U.S. said they'd detected signs of Iranian preparations for potential attacks on U.S. forces and interests in the Middle East, and the threat assessment in Iraq was raised to its highest level.

That prompted Germany to suspend its training of Iraqi soldiers in the north, and ordered the 160 German soldiers to stay on base.

The Ministry says the threat level has now been lowered, so its soldiers can again leave their base and would "soon" resume their mission.

Moreover, Iran's foreign minister is pressing ahead with intense diplomatic efforts to salvage Tehran's nuclear deal with world powers at the center of a crisis unfolding between Iran and the U.S.

Mohammad Javad Zarif chastised the international community, saying that so far, it has "mainly made statements, instead of saving the deal," according to the official IRNA news agency. He spoke in China on Friday after visiting Japan.

The Trump administration pulled America out of the deal last year and imposed escalating sanctions that have crippled Iran's economy. Other signatories to the deal — the European Union, France, Britain, China and Russia — have been trying to salvage it.

Iran recently warned it would resume enriching uranium at higher levels if a new nuclear deal isn't reached by July 7.

I for one wouldn't want to be on an Iranian Naval Vessel or even on Iranian territory if they attacked a US Naval Ship, or for that matter if they attacked and destroyed an oil tanker, makes no difference which flag it was flying.

Well I wouldn't want to be on the oil tankers.
So it goes both ways.