Cabinet Says Asmar Should Resign or Be Dismissed 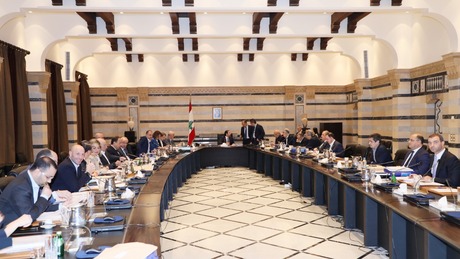 The Cabinet called for the resignation of Beshara al-Asmar, the chief of General Confederation of Lebanese Workers against the backdrop of his leaked insulting remarks about ex-patriarch Beshara al-Rahi, the National News Agency reported on Monday.

In a session dedicated to complete the budget discussions, the Cabinet held an evening session which ended at 2:30 a.m. and chaired by Prime Minister Saad Hariri at the Grand Serail.

“The Council of Ministers unanimously expressed its condemnations of what was said by the Head of the General Confederation of Lebanese Workers, Beshara al-Asmar, which should lead to his resignation or dismissal,” said Minister of Information Jamal Jarrah after the meeting.

“On the budget, a detailed discussion took place on proposals of articles. An article was added to the budget. As for the other articles, committees were formed for more study, otherwise we will await for the legal texts to see if they will be included in the budget,” added Jarrah.

“The Ministers will answer several questions regarding their ministries’ budgets during Monday’s Cabinet convention. The figures we have on the budget and deficit are almost final,” he concluded.