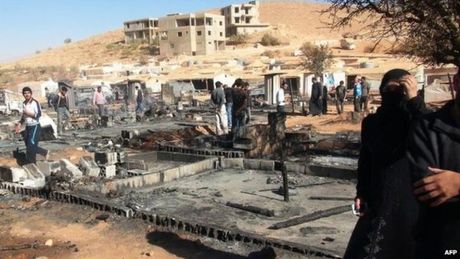 The Lebanese army gave an urgent notice to Syrian refugees in the Bekaa town of Arsal to remove all illegal cement-built camps before June 10, citing security reasons, the Saudi Asharq al-Awsat reported on Tuesday.

The daily said the order has resulted in “confusion” among the refugees, as well as in the municipality of the area which began to communicate with international organizations to provide tents as an alternative to the estimated 1400 families.

“The decision is crucial for several reasons mainly that cement tents are illegal and constitute a security threat,” army sources told the daily on condition of anonymity.

“The decision includes the demolition of all uninhabited tents as well,” they added.

“We informed the refugees of this and some of them have started implementation,” the mayor of Arsal, Bassel al-Hujairi said noting that the number of tents is estimated at 1400 tent.

He pointed out that meetings are underway with the Lebanese army to develop a clear implementation mechanism, and next Thursday they will hold meetings with the international organizations to secure tents for the families as a substitute.

"and constitute a security threat"
the end.

Its the latest camping trend, only in Lebanon. This tent is life guaranteed.