Frugal Fare for Ramadan in Damascus as War Saps Spending 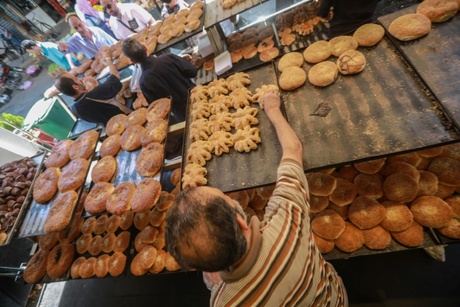 Abu Anas al-Hijazi scanned the stalls in the Syrian capital's Bab Srija market but bought nothing. For the cash-strapped 45-year-old wedding singer, this Ramadan is a frugal one.

"We used to lay out a large spread and invite relatives and friends for a feast around six or seven times at least" during the Muslim holy month, he told AFP.

"But now, I invite them once or twice at most."

Throughout Ramadan, Muslims abstain from eating and drinking during daylight hours and sit down to a feast -- known as iftar -- once the sun goes down.

But for many in Syria, where eight years of war have devastated the economy and unemployment is rife, sumptuous Ramadan feasts are no longer an option.

"We have swapped meat for chicken this year, and we have started to offer small meals, rather than large spreads," said the performer who earns less during Ramadan -- an unpopular month for weddings.

"Nothing is the same."

Abu Anas is among the many Syrians whose standard of living has plummeted since the conflict started in 2011.

"Almost 80 percent of the households across the country are struggling to cope with the lack of food or money to buy it," according to the World Food Programme.

For Rabbah Ammar, the economic slowdown means she must take measures to rein in the family's Ramadan's expenses.

The 52-year-old said she set aside some savings months ago to spend on food during the fasting month.

She said she buys most her produce from the Bab Srija market because "prices here are lower than in others".

She also chooses which dishes to prepare based on the price of the ingredients.

"When the price of green peas spiked, we replaced it with fava beans, which were cheaper," said the resident of the Sayyida Zeinab neighbourhood outside Damascus.

"Today, since meat is expensive, we stuff courgettes with rice instead," she clutching a bag of fruits and vegetables under arm.

Nearby, Abu Imad sprayed water on the plump tomatoes he had put on display, hoping to attract customers.

He said vegetable prices had dropped sharply this year. "The price of one kilo of cucumbers last year was 700 Syria pounds... and today it is about 200."

Sitting near boxes of fresh vegetables, Talal Shawkal's eyes flit back and forth, as potential customers walk past.

He said prices had fallen because of an increase in supply, with produce now available from the farms of Eastern Ghouta, just outside Damascus, after the government took the area from rebels last year.

Demand had not kept up, he said. "People don't have enough money to buy."

Mohammad Imad Kobeissi, a frail 60-year-old man, has for years earned a living carrying people's shopping from the market to the taxi rank on the main road.

But "today, I have to wait for a long time before a customer requests my help," he said.

With fewer sales, most people now only "fill one or two bags at most, which they can easily carry without my help."

Arranging cucumbers and courgettes on a large wooden cart, Abu Ammar places the smaller pieces at the front, and the larger ones at the back.

He says demand is higher for the former, mainly because they are cheaper.

The 60-year-old, who has been working in the market since for half a century, says the financial slowdown has altered people's purchasing habits.

"This year is the first time I have customers asking to buy a single vegetable," he said.

"This is not something we were used to in Syria," he added.

The man, whose home in Eastern Ghouta was destroyed in the war, said he understands that times are difficult.

"I had to sell my car so I could afford everyday expenses.

"When I have customers who ask for three courgettes, I give it to them and ask for their prayers instead of money."