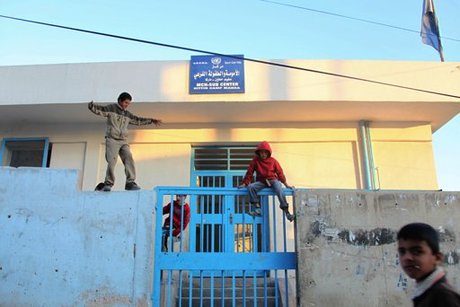 Addressing the U.N. Security Council, U.S. adviser Jason Greenblatt said UNRWA was a "bandaid" and that it was time to hand over services assured by the U.N. agency to countries hosting the Palestinian refugees and NGOs.

"The UNRWA model has failed the Palestinian people," Greenblatt told the council.

Last year, President Donald Trump's administration cut all funding to UNRWA, arguing that it was flawed as Washington pressed ahead with work on proposals for an Israeli-Palestinian solution.

Greenblatt, who along with Trump's son-in-law Jared Kushner is drafting the peace proposals, said it was time to "start a conversation about planning the transition of UNRWA services to host governments, or to other international or local non-governmental organizations, as appropriate."

Founded in 1949, UNRWA provides education and health services to some five million Palestinians in Jordan, Lebanon, Syria, the Gaza Strip and the West Bank, including East Jerusalem.

The United States will hold a conference in Bahrain next month focused on the economic aspects of the peace plan that Greenblatt said has the "potential to unlock a prosperous future for the Palestinians."

"It would be a mistake for the Palestinians not to join us. They have nothing to lose and much to gain if they do join us. But it is, of course, their choice," he added.