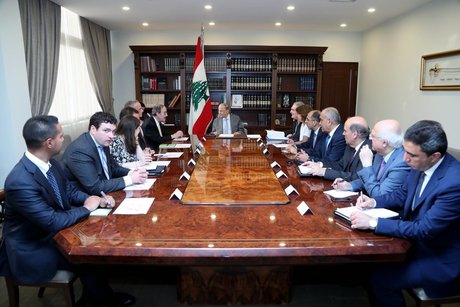 President Michel Aoun on Friday met in Baabda with U.S. Representative Eliot Engel, the head of the House of Representatives Committee on Foreign Affairs.

Engel was accompanied by a delegation and the meeting tackled “means to boost relations between the two countries in all fields,” the National News Agency said.

“We call on America to help in returning (Syrian) refugees to their country because it can no longer bear the repercussions, especially amid the difficult economic situation,” the president added.

Apparently referring to the U.S. concerns over Hizbullah, Aoun reassured that Lebanese laws penalize “any activity linked to funding terrorism or money laundering.”

“These laws are being implemented firmly and accurately and the international financial institutions are witness to this,” the president added.

“Thanks to its military and security forces, Lebanon, which has eradicated terrorism, has achieved security stability across its territory, especially the northern, eastern and southern borders,” Aoun went on to say.

Hariri's office said the talks tackled “the developments in Lebanon and the region and the bilateral ties between the two countries.”

The talks were continued over an iftar banquet thrown by Hariri.

Separately, Hariri met at the Grand Serail with British Ambassador to Lebanon Chris Rampling and discussed with him the developments and the bilateral relations.

Just look at the overpaid 7 presidential advisors take note of the president when he says " we are trying to curb expenditures and we are committed to the dissociation policy".