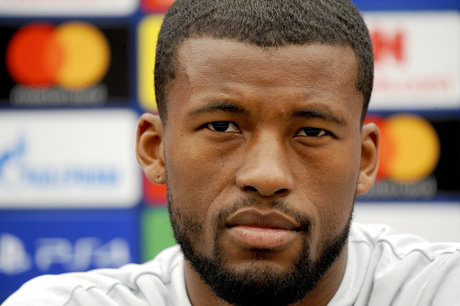 Georginio Wijnaldum says Liverpool's disappointment at losing last season's Champions League final will spur them on in their attempt to beat Tottenham in Saturday's European showpiece in Madrid.

Jurgen Klopp's side were beaten 3-1 by Real Madrid in Kiev a year ago but have responded to that setback by reaching the final again.

Wijnaldum has acknowledged that Liverpool will start as favourites, having beaten Tottenham twice in the Premier League this season on their way to finishing second, two places and 26 points above their opponents.

"Everything can happen. What happened to us last year will help us this year," Wijnaldum told a press conference at Liverpool's training ground on Tuesday.

"I don't think we are that nervous. We take it more as an experience than something we should be scared of."

Both teams have had almost three weeks to prepare for Saturday's match, having finished their Premier League campaigns on May 12.

Klopp took his players to Spain on a training break and then arranged a friendly behind closed doors to keep his players sharp.

"From the first day we come back together, the manager said the focus has to be on the Champions League now and we have to train hard in Spain," said Wijnaldum.

"We trained harder than normal, it was like a small pre-season, but in everything we did we were trying to prepare for the final so the manager wants us to be 100 percent concentrated."

Wijnaldum, who scored twice as Liverpool won 4-0 to complete a remarkable second-leg comeback against Barcelona in the semi-final, suggested that self-belief was the key to their success.

"After the 3-0 defeat in Spain, if you don't have the belief to change it at Anfield then it is already impossible. We had the belief we could change it.

"We know Champions League nights are special nights at Anfield and we can beat everyone. We did it at home against Manchester City (in last season's Champions League quarter-final first leg). They are one of the best teams in the world and we beat them 3-0."

Liverpool and Tottenham have each received more than 16,000 tickets for the final, although thousands more fans are expected to travel to Spain in the hope of capturing some of the atmosphere, even if they cannot get to the game.

"I don't know what to say to the fans who don't have a ticket," Wijnaldum said. "What can you tell them? I feel sorry.

"Everyone deserves to be there, especially if you support your team all season but that is something we can't control."