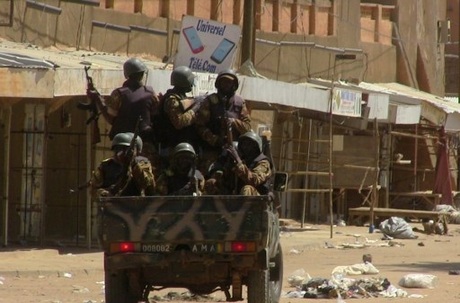 The idea of talking to jihadists may seem ludicrous to some, said the ICG, but insisted all avenues should be explored to protect civilians reeling from inter-communal violence in central Mali, fuelled by the Islamist revolt.

In a report, the ICG did not suggest halting military operations against Katiba Macina, the armed group of radical Islamist preacher Amadou Koufa behind a four-year-old insurgency.

But it recommended "a shift of tack, with force used alongside efforts to bring Katiba Macina leaders to the table", adding that prospects of defeating the movement on the battlefield were "remote."

However, a government official, speaking on condition of anonymity, told AFP that "the official line... for the moment is not to discuss with them."

This reflected a statement by Mali's Foreign Minister Tiebile Drame, who told Radio France International on a visit to Paris last week: "The line of the Malian state is that there is no dialogue envisaged with those to whom you refer."

The ICG report, entitled "Speaking with the 'Bad Guys': Towards dialogue with central Mali's jihadists," said previous contacts had "revealed a degree of pragmatism among Katiba Macina militants, suggesting that even if the odds are stacked against success, dialogue with the group is worth trying."

An independent group that proposes solutions to conflicts, the ICG acknowledged the idea of talking with jihadists could outrage "some Bamako elites" and may be seen as a step toward a deal and Sharia rule.

Foreign powers, in turn, "might see it as legitimising a terrorist outfit with blood on its hands," the report added.

However, "war between the state and jihadists in central Mali has led to growing intercommunal violence," the ICG said.

"To spare civilians additional harm, the government should explore the possibility of talks with the insurgents about local ceasefires and humanitarian aid."

The government in Bamako "should empower religious leaders to explore initial talks" with jihadist leaders and also seek dialogue among central Malians, "including those sympathetic to the insurgency," the report suggested.

To make such talks more palatable to Malian authorities and Western allies such as France, which has intervened militarily to combat Islamists, jihadist forces should be compelled to renounce ties to transnational movements such as al-Qaida in the Islamic Maghreb.

Delegates to a national conference in 2017 called for the opening of talks with Amadou Koufa and radical Tuareg leader Iyad Ag Ghaly, but the resolution was rejected by the Malian and French governments.

Amadou Koufa in March 2017 joined the newly-formed Group to Support Islam and Muslims (GSIM), which was born of a merger to become the leading jihadist alliance in the Sahel region with links to Al-Qaeda. Iyad Ag Ghaly is its leader.

This group, Drame said last week, "has contributed to shedding a lot of blood, too much blood, these last years."

Since the appearance of Koufa's movement, recruited mainly among his own Fulani (Peul) community, communal violence has spread in central Mali, a mosaic of ethnic groups.

Fulani people, who are traditionally cattle-breeders, have confronted the Bambara and Dogon communities of settled farmers and hunters, who in turn have created "self-defence militias".

In an explosion of violence on March 23, about 160 Fulani villagers were slaughtered at Ogossagou, near the border with Burkina Faso, by suspected Dogon hunters.

The U.N. mission in Mali (MINUSMA) announced on May 16 it had recorded "at least 488 deaths" since January 2018 in attacks by "traditional hunters against civilians of the Peul population" in the central Mopti and Segou regions.

Over the same period, armed Fulanis "caused 63 deaths" among civilians in the Mopti region, MINUSMA said.