Tens of Thousands Protest in Brazil over Education Cuts 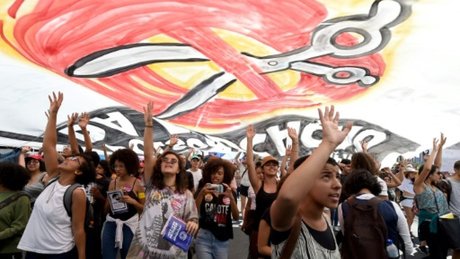 Tens of thousands of protesters took to the streets in dozens of cities in Brazil on Thursday for a second nationwide demonstration in as many weeks over the government's plan to slash education spending.

Far-right President Jair Bolsonaro's government has provoked outrage among students and teachers over its proposal to freeze 30 percent of discretionary spending for public universities in the second half of this year.

A suspension of post-graduate scholarships for students in science and the humanities has also fueled anger.

Protests began in the capital Brasilia in the morning and spread across the country to about 100 cities and in some cases occupied entire city blocks, according to AFP reporters and local media.

"The main message is that a 30 percent cut to education is absurd and makes it impossible for higher education in this country," said Lina Vilela, a teacher at the Brasilia rally, where protesters held posters with messages such as "Our books and pencils are our weapons."

Karina Afonseca said she was protesting against "the intellectual setback" Bolsonaro's actions would cause in Brazil.

"I'm here for those who are poor and deserve the right to quality public education," social services student Kaio Duarte said.

"I'm worried that the next generation won't have all of the rights to education that I have had."

"We can't simply pretend everything is OK -- it is not OK," said university student Isadora Duarte, 24.

The Ministry of Education had warned in a statement Thursday that teachers, students and even parents were not permitted to participate in protests during school hours.

Some students and school officials at the demonstration in Rio declined to speak to AFP, hoping to avoid any potential penalties.

But Duarte sees it differently.

"Protesting is the only way we can show that we don't agree with the government. We're in a democracy, we have the right to disagree," she said.

Architect and researcher 42-year-old Guilherme Adamo, who marched in Sao Paulo among protesters holding signs that read "Brazil united for education," said he wants the government to listen and to "invest in the future."

"This government lacks dialogue with society," he said.

Tens of thousands protested across Brazil on May 15 -- the first nationwide demonstration since Bolsonaro took power in January, which underscored growing opposition to the embattled president.

Bolsonaro, who has railed against socialism as he seeks to promote his ultraconservative ideas, described the May 15 protesters as "useful idiots" and accused leftist militants of stoking the rallies.

"Not for me," said Joao Vitor Menezes, 21, who is studying fashion design and looking for a job.

"I came here of my own accord," he said. "I just came from a job interview and I came to say this: unemployment is very high, we have no way to go out and fight for our dreams. Cutting education isn't going to fix the situation."

The government had said it would free up 1.59 billion reais in funding (about $400 million) for the sector.

Thursday's demonstrations come after thousands of pro-Bolsonaro protesters marched in cities across Brazil on Sunday in a show of support for the leader, who has seen his popularity plummet in his first five months in office.

Among their demands was for Congress to speed up approval of the government's stalled pension overhaul, seen as key to unlocking other much-needed reforms that are crucial to kick-starting economic growth.