'Naked Cowboy' Puts It All Back On to Run for U.S. President 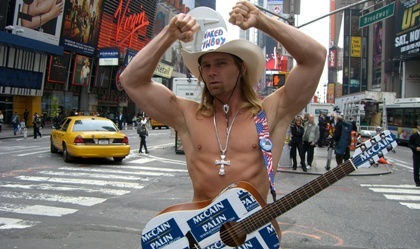 Watch out, Sarah Palin. There's a new conservative in town, and he's (nearly) naked and gunning for the White House.

The Naked Cowboy, a strapping guitar player and Times Square fixture known for busking in his briefs, 10-gallon hat and boots, says he will be donning a normal outfit on his next adventure: a run for the White House.

Robert John Burck, on his website nakedcowboy.com, has put the word out that he will be jumping in the 2012 U.S. presidential race.

"America needs a president who believes in America. (...) America, I will fight to give the power back to the people," Burck, a 40-year-old conservative, says on his website.

"America needs a president who will stand up for America and protect its language, its borders, and most importantly, its culture. What Americans need is a president who seeks to empower the people and to allow the free market to determine value, not a president intent on empowering government and misappropriating the resources of the productive class."

The cowboy unsuccessfully ran for mayor of New York in 2009.(AFP)