Syria Kurds Hand Over Five IS Orphans to Norway 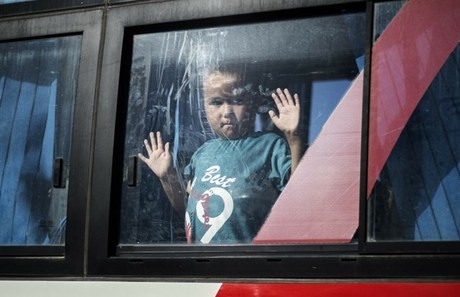 The Kurdish administration in northeast Syria on Monday handed over five orphans from families of the Islamic State group to Norwegian authorities, a spokesman said.

"Following a request made by the Kingdom of Norway ... five Norwegian orphans related to IS jihadists were handed over to a delegation from the Norwegian foreign ministry," Kamal Akef said in a statement.

Oslo confirmed that a delegation had traveled to Syria and Norwegian media reported that the five children, who had stayed in the Al-Hol camp, were from a single family.

"The aim is to rescue the children from the atmosphere of extremism, and to enable them to go back to their countries and get proper rehabilitation and be reintegrated in their communities," the Kurdish statement said.

Tens of thousands of people, jihadists as well as their families and civilians they detained, fled eastern Syria when U.S.-backed Kurdish forces launched a final assault on the last fragment of IS' so-called "caliphate" last year.

Large numbers of Syrians and Iraqis, as well as IS-affiliated families of more than 40 different nationalities, washed up in camps under Kurdish control in northeastern Syria.

The Kurds wrapped up their operation in the village of Baghouz in March this year but were left with thousands of foreign suspects and their relatives in their custody.

The Kurds have repeatedly warned they did not have the means to put such large numbers on trial or even just keep them safely locked up.

But the jihadists' countries of origin have been reluctant to take back their citizens, both for security reasons and for fear of a public backlash.

The Norwegian foreign ministry confirmed that a delegation met Kurdish officials in Syria but did not comment on the repatriation of the five orphans.

Norwegian media outlets reported that the five orphans were siblings born to a 30-year-old Norwegian mother and a 31-year-old African father.

They said the mother, who travelled to Syria in 2015 a year after IS proclaimed its "caliphate, is missing and the father is believed to have been killed.

Three of the five children were born in Norway and travelled to Syria with their parents, according to the Norwegian newspaper Aftenposten.

According to Kurdish officials, Monday's transfer was the first of its kind with Norway.

Norwegian security sources had said before Monday's repatriation that around 40 children with links to Norway were still stranded in Syria.

Other countries such as France and Belgium have much larger contingents of nationals still being held by the Kurds in northeast Syria.

The secretary general of the Norwegian Red Cross, Bernt Apeland, welcomed news of the five orphans' repatriation and stressed that all others should be sent home too.

"The camp is no place for orphaned children," he said, adding that the Norwegian government should work toward repatriating all its citizens who wish to go home.