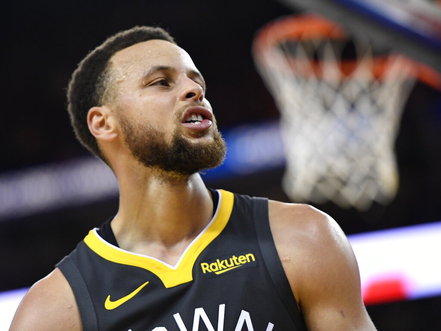 Injured and weary, the Golden State Warriors are one loss from the end of their five-year NBA dynasty run at the hands of the upstart Toronto Raptors.

The Raptors own a 3-1 lead in the best-of-seven NBA Finals entering Monday's game five at Toronto and could become the first team from outside the United States to capture the championship.

"It's difficult," Raptors coach Nick Nurse said of the excitement. "Can't let people take you someplace you aren't yet.

"We know this is a great team and we know how hard we have to play to beat them. We have to just focus in on trying to be the hardest working team on the floor."

The Warriors are in their fifth consecutive NBA Finals, seeking their third title in a row and fourth in five years.

Of 34 teams that seized a 3-1 NBA Finals lead, the only one that failed to win was Golden State in 2016, when LeBron James rallied the Cleveland Cavaliers to an historic title.

"We've been on the wrong side of 3-1 before, so why not make our own history?" Warriors forward Draymond Green said.

"We've won three in a row before. You've got to have faith you can get it done. Believe what we believe and give it what we got. And if we fail, you live with the results, but just leave it all out there."

Kawhi Leonard, who won an NBA title with San Antonio in 2014, directs a quick-strike attack and smothering defensive system for the Raptors, who have outhustled the injury-hit Warriors.

Golden State playoff scoring leader Kevin Durant, the 2017 and 2018 NBA Finals Most Valuable Player, has been out for a month with a right calf injury.

"His body will tell him if he can get out there," Green said. "If he can, great. If not, still got to try to find a way to win the next game."

The Warriors seek a third consecutive title and fourth in five seasons, but the toll of so many deep playoff runs is showing, guard Klay Thompson missing game three with a left hamstring strain and Andre Iguodala slowed by a leg injury.

"It's a long season. You play 100-plus games, you're going to be banged up," Thompson said. "You just got to dig deep. No one's going to feel sorry for you, so you just got to go out there, man up and play the best of your ability."

DeMarcus Cousins returned from a torn quad in six weeks to play in the finals while Kevon Looney was declared done with a chest injury but returned for game four.

Combined with Toronto's solid play, the injuries might be too much for the Warriors to overcome.

"It's not over," Warriors guard Stephen Curry said. "We still have life and have an opportunity to win. It's just a matter of can we get it done or not, and we're going to leave it all out there starting on Monday.

"The only way we're going to get back in this series is give everything we got for 48 minutes, everybody that sets foot on that floor in game five. In our locker room we're talking about believing. Everybody believes we can get this done."

The Warriors rallied from 3-1 down to beat Oklahoma City in the 2016 Western Conference finals, so they know it can be done.

"I know we're capable. We got a lot of talent and we got a lot of pride. These guys have been to the finals five straight years for a reason. They're unbelievably competitive. And they're going to fight the whole way."

The Raptors expect nothing less.

"We didn't do nothing yet," Raptors guard Kyle Lowry said. "They're the defending champs and they're not going to go out easy. They're going to come and fight and that's how we're preparing ourselves."