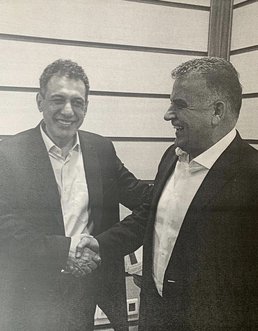 General Security chief Maj. Gen. Abbas Ibrahim on Monday met with Lebanese detainee Nizar Zakka in Tehran and the latter will be freed and repatriated to Lebanon on Tuesday, General Security said.

Ibrahim also met with a number of Iranian officials and has put President Michel Aoun in the picture of all the meetings he has held in Iran, Lebanese TV networks reported.

Earlier in the day, Iranian state television reported that Zakka "will be released in the coming hours."

The report on state TV's website mirrored a report earlier carried by the semi-official Fars news agency about Zakka, a Lebanese advocate for internet freedom.

It said Zakka was to be released "only because of the respect and dignity" Iran has for the leader of Hizbullah Sayyed Hassan Nasrallah and that negotiations were not held with "any person or government."

Lebanon's Foreign Ministry had on Tuesday announced that Tehran had asked Lebanese authorities to send a delegation to Tehran for Zakka's repatriation.

Iran's supreme leader Ayatollah Ali Khamenei pardoned 691 prisoners on the occasion of the end of Ramadan, but Zakka was not among them, authorities said Sunday.

Zakka has been detained in Iran since 2015 over spying allegations. He was sentenced in 2016 to 10 years in prison and a $4.2 million fine.

Zakka, who lived in Washington and held resident status in the U.S., was the leader of the Arab ICT Organization, or IJMA3, an industry consortium from 13 countries that advocates for information technology in the region. Zakka disappeared Sept. 18, 2015, during his fifth trip to Iran. He had been invited to attend a conference at which President Hassan Rouhani spoke of providing more economic opportunities for women and sustainable development.

On Nov. 3 that year, Iranian state television aired a report saying he was in custody and calling him a spy with "deep links" with U.S. intelligence services. It also showed what it described as a damning photo of Zakka and three other men in army-style uniforms, two with flags and two with rifles on their shoulders. But that turned out to be from a homecoming event at Zakka's prep school, the Riverside Military Academy in Georgia, according to the school's president.

As usual, another slap in the face of the lebanese state; all the government is gesticulating and jumping in hoops to take some credit for zakka release, and iranians pick their drone to give credit to him. Who is hassan nasrallah? He is not an elected official. Not even appointed by an elected official. He represents a mezzanine illegimate power and iranians are giving him more importance than he deserves

If hassan nasrallah was so important, why wouldnt they have released zakka earlier? Inno hassan decided today he wants him?

A sign of goodwill for the Americans as the Japanese Prime Minister is currently in Tehran mediating the Iranian-U.S conflict.

And if I’m not mistaken, Angela Merkel is also there or about to visit Tehran.

"libanaisresilient 21 hours ago
The most famous and maybe the most powerful militia in the world! Let's not diminish the relevance of our boys! Thanks to them Lebanon has been noticed."

Iran's Fars news agency said Nizar Zakka will be freed in the next few hours at the request of Sayyed Hassan Nasrallah and "not any person or government."

Something does not add up?!

It shows how much respect the Iranian regime has for their office boy in Lebanon.

i guess the news has not reached your tiny shia brain yet that nizar zakka is not a citizen of the United States.

I have the utmost respect and deepest admiration for general aoun who is now president and a shia imam for forcing the iranian regime to free Mr. nizar zakka.

and why would Nassrallah who chants death to Amreeka request the release of an American Spy??

God Bless Sayed Hassan for releasing this CIA operative. Where would Lebanon be without him?!

As long as this poor man gets back to his family and children. He suffered enough!

So, no credit to Aoun then, they have made him look like a fool. I wonder how he must be feeling. Nasrallah has no other interest in seeing Zakka free other than his filthy reputation.

I just hope that Zakka is strong enough to refuse to thank Nasrallah..

It will be a condition of his release. They probably wrote for him his thank you nassrallah speech.

and Abbas Ibrahim will make sure it happens.

FARS said Zakka was to be released "only because of the respect and dignity" Iran has for the leader of Hizbullah Sayyed Hassan Nasrallah and that negotiations were not held with "any person or government."

This means abbas ibrahim is a representative of nassrallah and not the Lebanese government.