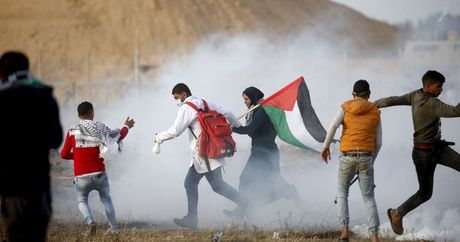 A Palestinian medic has succumbed to his wounds a month after being shot during clashes along the Gaza border, Palestinian officials said.

The Palestinian Red Crescent organisation said in a statement he had been hit in the face by a rubber-coated bullet "while performing his humanitarian duties" in northern Gaza on May 3.

Since the injury he had been receiving treatment in Hebron in the occupied West Bank, it said.

There was no reaction from the Israeli army.

Palestinian official news agency Wafa said the father of four was hurt while treating wounded people near the border fence in Jabalia in northern Gaza.

Palestinians have been gathering along the heavily-guarded Israeli border fence since March 2018, demanding Israel end the crippling blockade of the strip.

On the day Jdaili was hit two Israeli soldiers were injured by gunfire.

It sparked a two-day flare up, with hundreds of rockets fired from the strip towards Israel and dozens of targets struck by the Jewish state in response.

At least 294 Palestinians have been killed by Israeli fire in Gaza since March 2018, the majority in the border clashes, according to an AFP toll.

According to the World Health Organization three other Palestinian medics have been killed during the border protests.

If Hamas really wanted they would stop the border clashes by keeping the Gazans away from the fence, and there will not be a single further casualty.
However we all know that all they are really interested in are more casualties to play their propaganda game.

Sad. A worker who risks his life saving others. These people are such an inspiration.