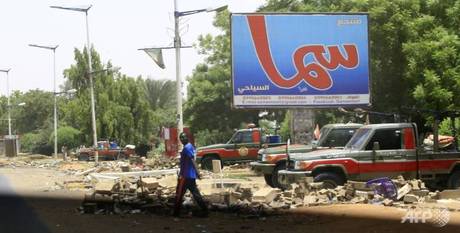 Shops and businesses remained shut and residents stayed indoors in the Sudanese capital Tuesday as a nationwide civil disobedience campaign aimed at pressuring the military rulers entered a third day.

The strike's launch on Sunday came nearly a week after dozens were killed in an assault by security forces on demonstrators holding a sit-in outside the army headquarters in Khartoum to demand civilian rule.

On Tuesday public transport buses were ferrying passengers in some parts of the capital, but Khartoum's main business and commercial districts remained shut in the morning, an AFP correspondent reported.

Vehicles loaded with machine guns of the Rapid Support Forces -- paramilitaries accused by witnesses and protesters to have been largely behind the crackdown -- patrolled several districts of the city.

Fewer people were on the streets than usual.

"In the last three days we have lost a lot of money," said Ibrahim Omar, an employee at a tour operator. Travel agencies were hit hard due to the internet blackout on Monday.

"We cannot do anything. We are not doing any international flight bookings. I hope it does not continue like this."

But protesters who have campaigned for the civil disobedience say the agitation has been successful so far.

"This shows clearly what we can do, and also in a peaceful way," said protester Ishraga Mohamed.

"Such a campaign does not lead to killing people and at the same time puts pressure on the military council. We will continue with it until our goal is achieved," she told AFP.

The civil disobedience campaign was called after men in military fatigues carried out a brutal crackdown on protesters at the weeks-long sit-in outside the army complex on June 3.

Since then the overall unrest has left 118 people dead, according to doctors linked to the campaign. The health ministry says 61 people died nationwide on June 3, including 49 by "live ammunition" in Khartoum.

Protest leaders have consistently called on the ruling generals to make way for civilian rule.

The generals took power after ousting longtime ruler Omar al-Bashir on April 11 after months-long protests against his iron-fisted, three-decade rule.